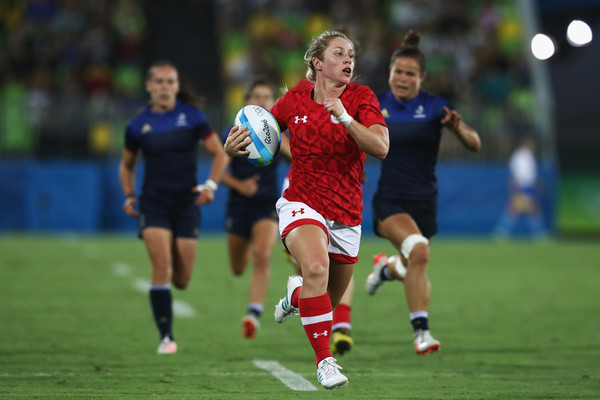 Langford, BC, April 2, 2018 – Canada head coach John Tait has announced his historic 13-player roster to take part in Women’s Rugby Sevens’ Commonwealth Games debut next month on the Gold Coast of Australia.  Canada will depart for the Gold Coast on April 6 for their third-ever multi-sport games as they hunt for another piece of silverware to go along with their bronze from the 2016 Rio de Janeiro Olympic Games and gold from the 2015 Pan-American Games in Toronto.

Tait has named a formidable squad which includes captain Ghislaine Landry and Julia Greenshields who have been in fine form so far this season, each scoring over 60 points after only two legs on the HSBC World Rugby Women’s Sevens Series. Greenshields currently finds herself in third place for most tries scored on the series with 12, while Landry remains the all-time points scoring leader on the world series with 906 points, 86 more than the next highest Portia Woodman of New Zealand.

“It’s an honour to be named to the first-ever Commonwealth Games roster for Canada. Having seen success as part of Team Canada in both Rio de Janeiro and Toronto, we’re incredibly excited to take part on the Gold Coast in what will be a historic tournament for Women’s Rugby,” said Landry.

Canada enter the Games ranked third in the World Series standings after 3rd and 4th place finishes in Sydney and Dubai respectively. They have been drawn in a tough pool alongside one of the favourites for the title, New Zealand, as well as dangerous outfits from South Africa and Kenya.

The action continues the following weekend as Canada travel to Japan to take part in the third leg of the series in Kitakyushu. Japan has been a happy hunting ground for Canada this past year as the Maple Leafs claimed gold here a few weeks ago and last year Canada won one of their two silver medals on the season.

“We are excited for another opportunity to compete at a multi-sport games, even more so with these games as it will be a first time ever and feature the current top three teams in the world,” said Tait from Langford. “Selection, for the first time this season has been extremely tough, with the return of some of our most experienced players along with a few of the younger ones putting they hands up with some really good consistent play of late,“ he added.

Tait’s roster will be bolstered by the return of speedsters Bianca Farella and Charity Williams, who have have been sidelined with injury since last season. Jen Kish, however, is not available for selection based on a re-occurring injury.

“Obviously, not having a player of Jen’s calibre and experience is a hit to us, she played great in Sydney winning some crucial turnovers at critical times for us and creating so much space for others on attack. She has been playing with some lingering injuries from the past couple of seasons but showed her character and toughness to play through them for the team,” said Tait.

“Fortunately, the return of Charity and Bianca along with Sara Kaljuvee hitting some top form, gives us some good options within the squad to challenge for and bring home a gold medal. “

The Commonwealth Games rugby sevens will take place from 13-15 April at the 27,500 capacity Robina Stadium in Robina, Queensland, Australia.

"I'm looking forward to seeing our Canadian athletes storm the field in rugby sevens in Gold Coast," said Chef de Mission Claire Carver-Dias. "Especially the women's team, which will join the other nations in the first ever women's rugby sevens competition at the Commonwealth Games."

Note – The Commonwealth Games will not count for HSBC World Series points. Broadcast details will be announced in the coming weeks.

The entire Canadian Team will be officially announced by Commonwealth Games Canada on Monday, March 26th. The 2018 Games will take place April 4-15, 2018 in Gold Coast, Australia, with 70 participating countries and over 4000 athletes taking part.