BC Rugby Boys' Age-Grade Finals Finish With A Bang 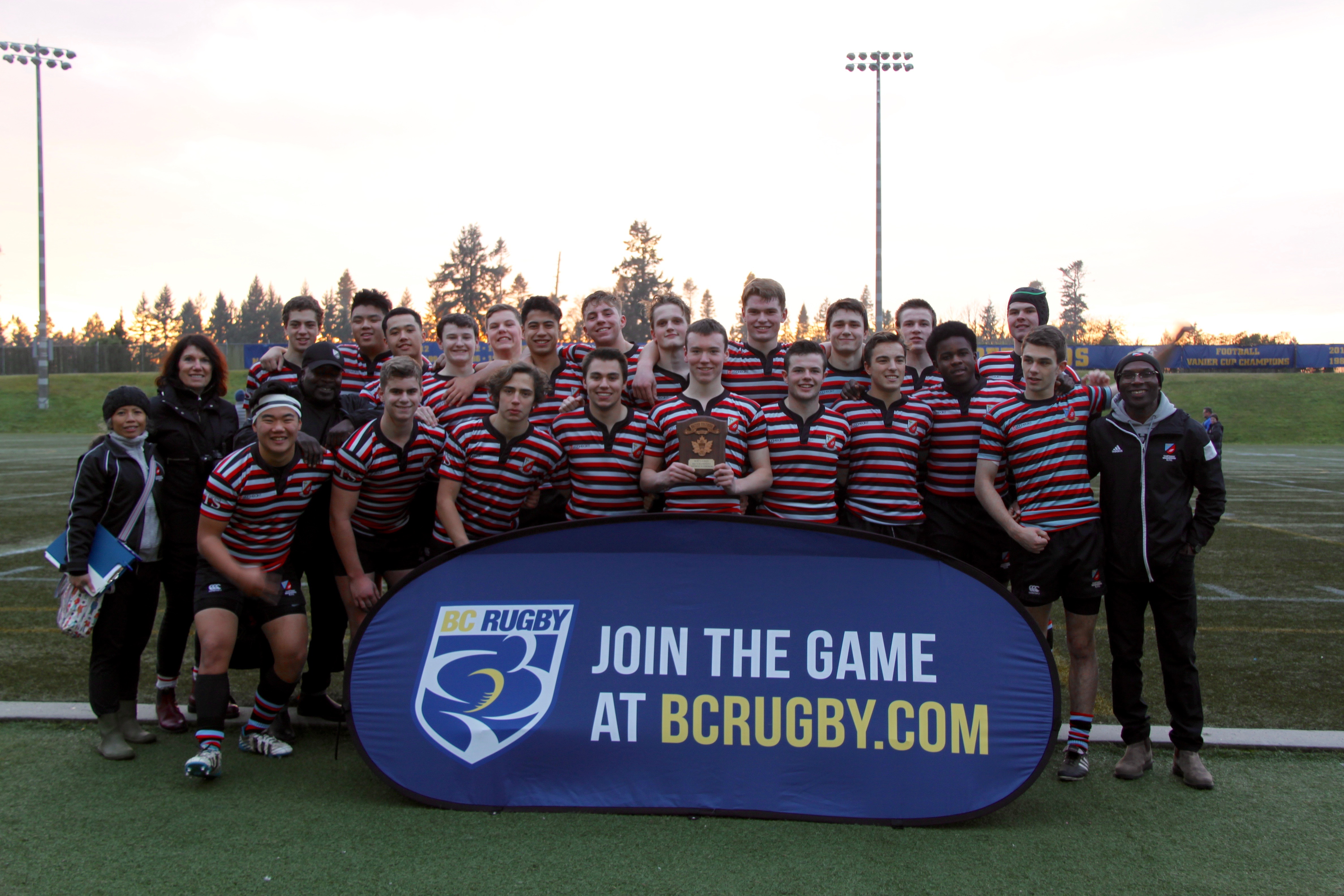 It was a crisp and sunny afternoon yesterday for the BC Boys Age-Grade Finals. This is the first year BC Rugby has hosted the finals and to a great turnout at the David Sidoo field at Thunderbird Stadium in Vancouver.

The U16 Boys’ match saw Cowichan RFC and Capilano RFC kickoff at 1pm. Before the game even began, the audience could hear Capilano’s chant from behind the closed dressing room door. Who are we? Capilano! resonated onto the pitch, followed by fifteen teens in black and yellow kit. Cowichan was already on the field waiting to receive the kickoff from the mainland team. Within minutes of the initial whistle, both teams clearly wanted a win. Each side had some early fumbles, missed passes and miscommunications, but the jitters wore off when Capilano was awarded a penalty kick. Three points quickly went up on the board and ignited a response from Island team. Cowichan earned their first try with teamwork, quick thinking, and a little improvisation that showed how the teammates’ trust in one another and in their own abilities. While Capilano’s backline was unorganized, Cowichan’s #11 cut in and exploited the gaps. At halftime, the score was 24 to 10 for Cowichan. In the second half, the West Vancouver squad fed off the crowd’s unwavering energy and support

Even though the Island team had strong runners who kept driving their boots in midst of a tackle, Capilano had their own runners ready to take advantage of their opponent’s weakness. When Cowichan’s #7 attempted to catch a pass behind his back, Capilano’s fullback snatched the ball and made a run for the try line from the 22m line. The mainland squad fought hard to close the gap in the score, nearly accomplishing that feat, but Cowichan’s backline had a united front consisting of their winger, fullback, and outside centre, who earned the second to last try. These three were a force to be reckoned with throughout the game. During the last fifteen minutes of the match, Capilano’s #12 stole the ball right out of Cowichan’s grasp. Inside the Island’s half, #12 handed it off to #22 for a clear breakaway, but was stopped by the official’s whistle for an earlier infraction. Cowichan solidified the win when their eighth man ran a switch off the lineout, found a gap in the opponent’s defence, and planted the ball between the uprights. Although Capilano had a lot of passion and maintained that fire throughout the game, they were unable to focus that energy into a win.  Cowichan emerged the victors at the final whistle, winning 36-27.

The excitement from the first match continued with the U18 Boys Final which kicked off at 2:30pm. Although the winter sun hid behind clouds for most of the match, the boys’ spirits were high. The Castaway Wanderers received the kick from the Bayside Sharks, who quickly regained possession. Much like the U16 match, the first ten minutes had a penalty kick, only the Sharks were unable to make the conversion. The Wanderers rucked hard and used every breakdown as an opportunity to keep or change possession. Both sides tenacity and passion were evenly matched, to begin with, resulting in a neck and neck game for the first half.  A 5-5 scoreline at halftime left everything to play for in the second half.  Both sides fought hard for every metre, especially with the Castaway’s making almost every tackle. Their eighth man was an impenetrable wall, often driving through tackles, leaving blue Bayside jerseys in his wake. But Bayside had a powerhouse of their own in player #16, who hit fast and ran even faster.

The highlight of the match came close to the beginning. Castaway’s #14 had what looked like a clear breakaway, running through the Sharks unscathed. He was within Cowichan’s ten-metre line when Bayside’s #14 delivered a try-saving tackle, delighting many of the spectators. The Shark’s winger had a breakaway of his own, but couldn’t make it past the Wanderer’s #8. The Castaway’s good communication, hard hitters, and aggressive rucking style gave them the advantage over the Bayside Sharks. The scrumhalf of the Island squad initiated the final try-scoring play of the afternoon. He battled his tackler until support came, his teammates rucked over, and then the Wanderers had a successful pick and go that resulted in the final score of 34 to 5 for the Castaway Wanderers.

Congratulations to all teams for making it to the BC Age-Grade Boys Finals. The hard work and dedication of the athletes, their coaches, and their families was tremendous. Best of luck to these teams in the 2018 season. You can keep up to date on Girls and Boys Age-Grade standings here on the BC Rugby website. We can’t wait to host the finals next year!

Did you know that all Junior and Mini Members of BC Rugby have access to an exclusive deal for HSBC Canada Sevens tickets?  Even better, if you take advantage of this deal before December 31st, they will also get a free ticket to the Canada vs. Uruguay World Cup Qualification match at BC Place on January 27th.  Don’t miss this fantastic opportunity to watch world-class rugby right here in BC.  Click Here for more information.

Gallery of action shots from both finals – Click Here