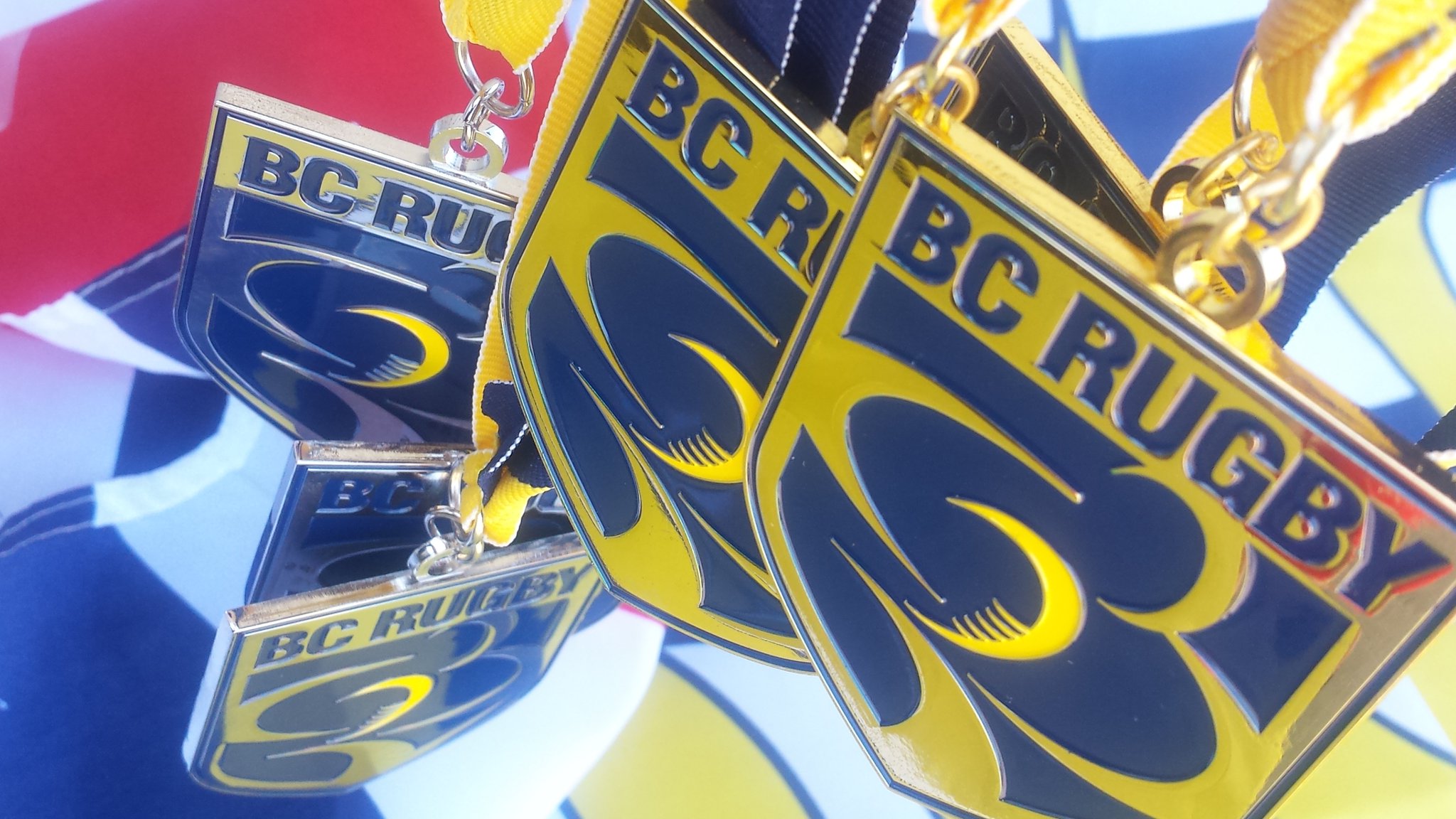 Burnaby, BC - July 1-3, 2017:  An exceptional three days of Age Grade rugby culminated at Burnaby Lake yesterday.  The Provincial Regional Championships, proudly sponsored by B2Gold, is one of the highlights of the BC Rugby calendar and this year's event more than lived up to expectations.

The weather may have gotten off to a cooler start, thanks to some patchy cloud, but the action on the field was no less gripping than the previous two days.  With the pool stages over, Day 3 was all about knockout rounds as teams battled for podium spots and the coveted title of PRC Champions.  With so much on the line, it wasn't surprising to see extra levels of commitment and determination etched across the faces of players as they took to the field.

In the inaugural U14 Girl's division Vancouver Island Tide fought their way to the bronze medal and Fraser Valley Green secured silver.  It was Fraser Valley Gold, no doubt hoping to live up to their team name, who topped the podium in the end, securing both the gold medal and illustrious title of first ever U14 Girls Provincial Regional Champions.  The U14 Boy's teams were not to be outdone though and put in some excellent performances.  Thompson/Okanagan won a close battle against North Vancouver Island Tsunami to claim bronze, while Vancouver North and Vancouver Island Tide contested the final.  At the final whistle, Tide were the victors and claiming the U14 Boys title.  The U15 Boy's division was an entirely Vancouver affair, with North, West and South vying for position.  North collected the bronze medal while the division final was dominated by Vancouver South, beating the Vancouver West by 29 - 0.

Before anyone had time to catch their breath we were in to the U16 medal matched.  In the Boy's division It was Fraser Valley East Gold who secured the bronze with a 22 - 12 victory over Vancouver South.  Meanwhile the final between North Vancouver Island Tsunami and Vancouver East/West was a very close game.  At the final whistle it was Tsunami who came out on top, winning 14 - 10.  When it came to nail biting matches, the U16 Girls were not to be outdone.  The bronze medal was claimed by just a single point margin as North Vancouver Island Tsunami beat Vancouver Wave by 15 - 14.  In the division final, Vancouver Island Tide claimed the top spot in a memorable encounter with Fraser Valley, the final score standing at 27 - 17.

As the shadows grew taller, the U18 medal matches got underway.  First up were the Girl's teams, where Vancouver South took on Vancouver Wave for the bronze medal, South emerging victorious.  The final was a brilliant encounter between Thompson / Okanagan and Fraser Valley.  In a closely fought match, both sides vied for the upper hand.  Eventually there was just one score separating the two teams, TORA the jubilant victors at 12 - 7.  It was evident just how much the victory meant to the girls from the interior as their cheers echoed around the grounds.

Last on to the field looking for their moments of glory came the U18 Boys.  In a small narrative twist, one of the teams competing was actually a U17 side from Vancouver Island Tide, stepping up to play against older opponents.  Having already shown they were not to be written off in the pool stages, they produced a dominant performance to claim the bronze medal, beating Fraser Valley Central 29 - 5.  That left just two teams, one pitch and 40mins of rugby to decide the U18 title for the tournament.  Fraser Valley East and Vancouver Island Tide both looked very composed when they took to the field.  After initial phases of play, Fraser Valley started to apply the pressure and were soon 10-0 up.  Tide continued to put in a spirited performance, with some electrifying runs.  In the end though, they couldn't find a way back in to the game and the final score was 15 - 5 against them.  Both sides should be proud of their performances though, having demonstrated some exceptional rugby throughout the weekend.  Many of the younger players will have been watching on in awe at the ball skills and power on display.  And so it was that the tournament came to a close with Fraser Valley East being awarded the gold meal and title of U18 Boys Provincial Regional Champions 2017.

In total, over 1000 players were in attendance over the three days, along with hundreds of supporters, dozens of coaching staff, match officials and organisers.  Over 300 tries were scored and more than 4500 minutes of competitive rugby were played, the equivalent of 3.2 days of nonstop action if the games were run back to back.  The enthusiasm from the athletes was palpable and they consistently delivered exciting end to end rugby action, much to the delight of onlookers.

BC Rugby would like to make a number of thanks to groups and individuals.  To the match officials, coaching staff, parents, supporters, players and volunteers who all played their part in making the tournament such an enjoyable and successful affair.  Also to National Women's Team players Carolyn McEwen and Andrea Burk, along with National Men's U20 player Jake Thiel who were on hand to award the coveted hardware.  Finally to our Sponsor B2Gold for their continued support of youth rugby in BC.

Looking forward to seeing you all again next summer!

Full Size versions of these squad images and others from the tournament can be viewed here.

Scores from across the weekend can be found on the BC Rugby Competitions page.