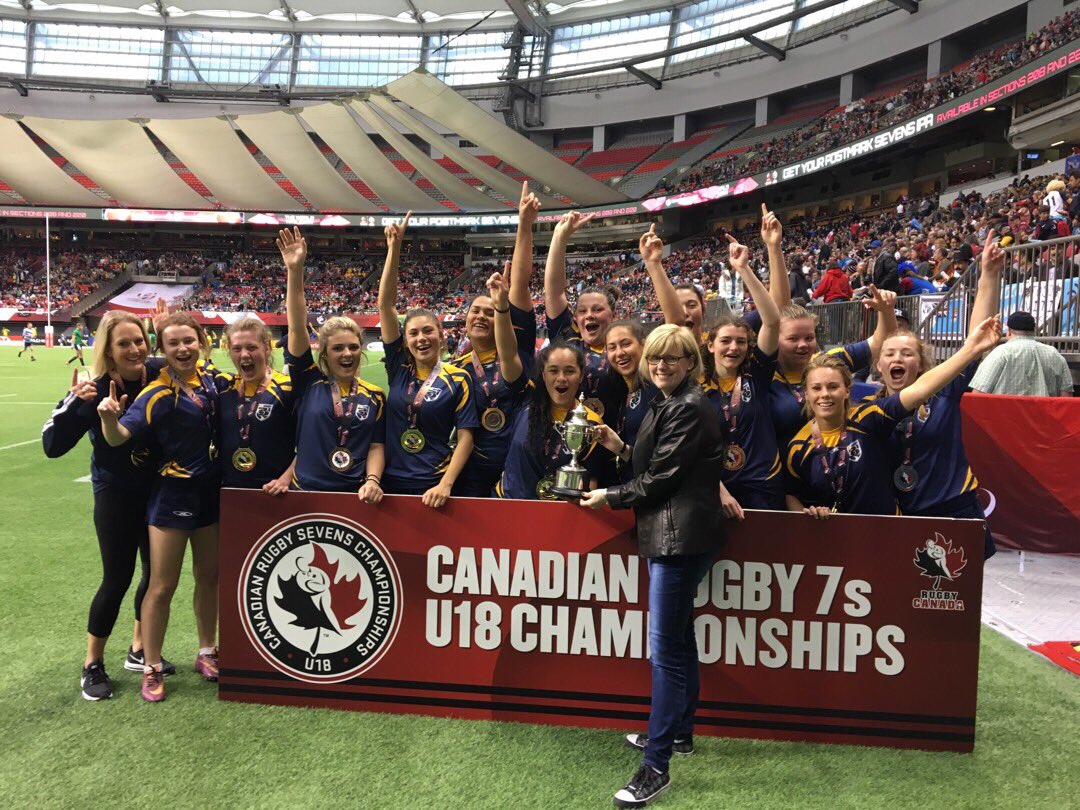 On Saturday March 11th, the BC Rugby Elite 7s Girls faced the Ontario Junior Blues 7s in the final match in BC Place. With amazing efforts from both teams, BC Rugby won the Gold Medal with a final score of 12-5.

During the first 2 days of competition at Connaught Park and Burnaby Lake, BC Elite 7s Girls went 4-0, proving to be unstoppable. In BC Place, BC’s Girls' team were able to demonstrate their skill and talent in front of 30,000 spectators during Day 1 of the HSBC Canada Sevens tournament. In front of roaring crowds and proud members of the BC Rugby community, the BC team proved victorious and claimed their second National U18 Sevens Championship win. They finished the multi-day championship with 191 points for and 5 against.

Captain of the Elite 7s Girls' team, Tausani Levale, shares her experience playing in the finals, “Playing in the stadium was one of the most surreal moments I have ever experienced in my rugby career. The hour leading up to the game is the biggest test of one’s mental toughness and focus.â¯ I am so glad I had an amazing team with girls that I've played alongside for years to rely on. Though I was consumed with nerves prior to the game, I felt nothing as soon as the whistle blew.â¯ Fueled by the crowd, we came out with a win!â¯ The atmosphere was unreal and it was the most rewarding and relieving feeling ever. I am so honoured that I was able to experience this two years in a row with some of my best friends. It means so much to my family and I – it puts purpose to all our hard work over the years.â¯ I hope this tradition continues for years to come and I hope it will inspire other young athletes as it has me.”

Coach Darcy Patterson also reflects on her team's performance, "It is amazing to have these opportunities for young female athletes. Having Canada 7s and Rugby Canada working in partnership to have the final showcased in the stadium is incredible.  These athletes showed a lot of heart, great rugby skills and overall did so well under the pressure of playing in front of over 30,000 people. Ontario fought until the end and really pushed the girls to earn the championship.The future is bright for rugby in Canada."

Special recognition goes to Morgan Sangster, the team's athletic therapist. BC Rugby would also like to thank all the High School coaches that have invested time into their programs and have encouraged these players to represent BC at this level.

This week, players from last year's Elite Girls' 7s program will be competing in the National University 7s Rugby Championships, thus demonstrating that this program is an integral component of the pathway to representing Canada.

On the men’s side, the BC Elite Boys' 7s finished fourth place giving them a lot to build upon for next year's competition. BC Rugby would also like to recognize Shane Thompson, Head Coach of the Elite Boys' 7s, who has ran a successful program over the past several years and has put incredible time and effort into growing the program and strengthening its players.

About the BC Rugby Elite Youth 7s Program

The BC Rugby Elite Girls’ 7s and Elite Boys’ 7s Programs are designed to help develop young athletes into the rugby players who will be best qualified to represent Canada with distinction at future Olympic Games and on the World Rugby 7s circuit.

About the National U18 Sevens Championship

As part of the exciting Canada Sevens tournament in Vancouver, Rugby Canada hosts an annual age grade competition, the U18 National Championships. The event takes place over 2 days and allows the participating athletes to take in the exciting action of the HSBC Sevens Series event at BC Place. The Men’s and Women’s U18 Cup Finals take place on the pitch of BC Place on the Saturday of the Canada Sevens tournament.