U19 Men secure bronze, U20 Women battle Keltics at CRCs 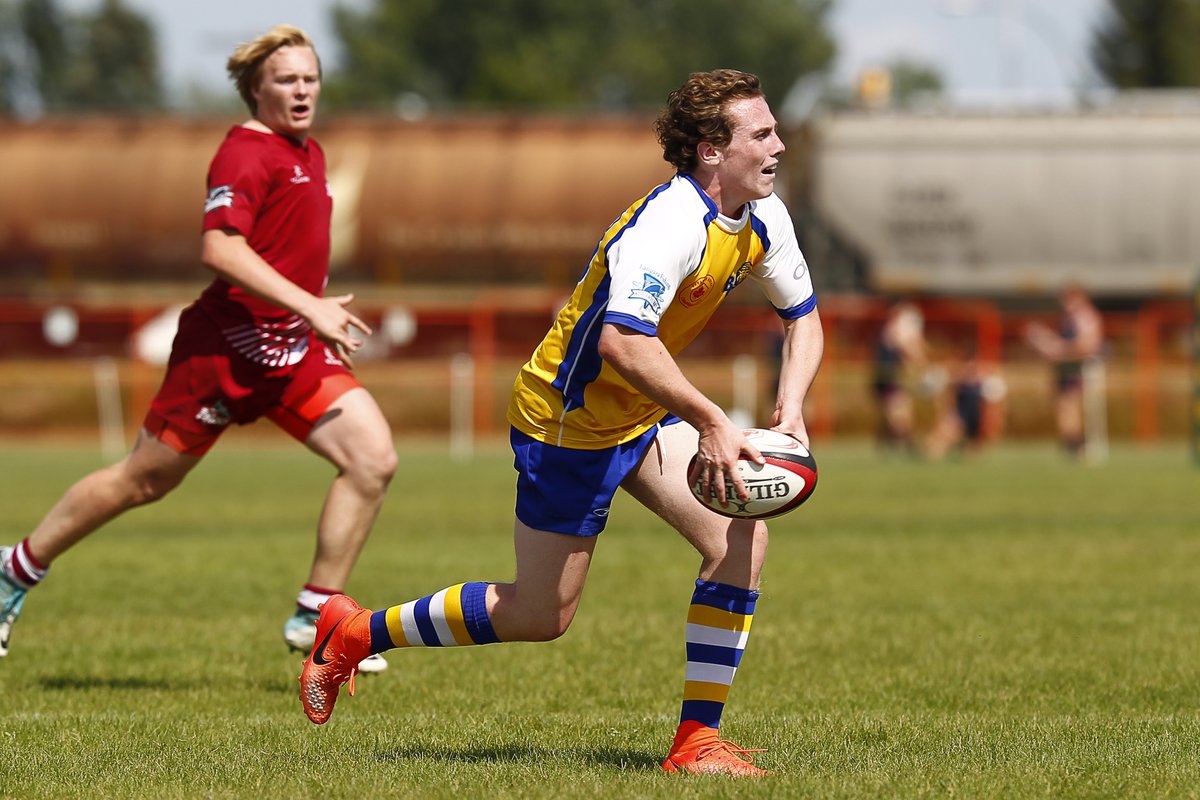 Saskatoon, SK – July 20, 2018: BC’s U20 Women and U19 Men were back on the pitches of Saskatoon Rugby Club for the final day at the 2018 Canadian Rugby Championships (CRC).  The U19 Men were in the bronze medal match against Équipe Québec while the U20 Women were set to take on Nova Scotia Keltics.  On a blustery day, both teams would not only have to battle against opponents, but also the strong winds blowing right down the fields.  Read on to find out how they both faired.

Knowing your opponent can have some real advantages and BC looked very much like a team that had done their homework and reflected on their first encounter with Équipe Québec right from the start. Early play hovered around the halfway line as the two teams sized each other up.  BC had really tightened up their attacking game, coming on to the ball with much more pace and precision than previous games.  The impact was almost immediate and the gold shirts surged up the field, Québec struggling to contain Lachlan Kratz as he broke through tackle after tackle.  Quick and accurate passing in the backline soon had the ball in the hands of Corben Bowen, and the Chilliwack player was all too happy to get the team’s first try.  The boot of Jack Scher added two more points and BC had a solid 10-0 lead.

BC were playing like a side with real confidence and composure, showing their full potential after some disappointing results earlier in the week.  Their back line was moving at pace and asking questions on both wings, while the pack were particularly effective going forwards.  Équipe Québec were not going to take this lying down though and launched their first meaningful attack, showing they could be just as dangerous out wide.  The men from the east were patient and groundout against a hard working Bc defence.  Off the back of a scrum on the BC 5m line, Québec saw an opportunity.  Despite being repelled a couple of times they eventually broke through BC lines and got a try of their own.  The conversion sailed wide against a howling wind.

Sensing the danger from their opponents, BC went back on the offensive immediately, taking the game right up to the Québec 5m line.  With the wind limiting their kicking options, the men in blue and white were forced to try and run it out of their own 22 and met a wall of gold shirts.  Keeping them pegged back near their own try line, BC were patient and eventually secured possession.  In a textbook set piece, Sam Kahn whipped the ball out the back of the scrum, moving efficiently down the line to Kyle Tremblay who dived over in the corner for BC’s second try.  The conversion was missed, but BC had their 10 point cushion back and Équipe Québec, try as they might, could not score again before halftime.

Coming into the second half, it was time for BC to face the wind and they quickly discovered how much of an advantage it handed to their opponents.  Équipe Québec were able to shift the game some 70m with just a single kick while BC would find themselves having to play a tighter running game to gain territory, an exhausting prospect. Québec capitalized on the wind advantage and had an attacking lineout on the 5m line which evolved into a maul.  BC were unable to repel the blue and white forces and Québec grabbed a second try.  The conversion was wide, leaving BC just five points clear at 15-10.

Again, the response from BC was measured but meaningful.  Realizing that with the wind against them they had to retain possession to avoid being forced to perpetually play out of their own half, they stuck to smash and grab tactics.  Having multiple Carson battering rams in your side is a real advantage when playing this style of rugby and, along with the rest of the pack, they broke through plenty of Québec tackles.  The back line, clearly not wanting to be outshone by their teammates in the pack, were on real form with their passing and their quick hands and quicker feet set up Kyle Tremblay for a second try, BC’s third, in the far corner.  The wind proved too much for the long-range conversion effort, but BC had their ten-point buffer back.

Équipe Québec attacked with menace and had Bc scrambling on their own 5m line.  An attempted repeat of the set piece from the lineout failed, but the blue and white shirts kept coming.  Their lineout would prove to be their downfall as BC managed to steal possession multiple times from Québec throws.  Sam Kahn sold a superb dummy and romped 40m up the field before finally being brought to a halt.  Bc would spend the majority of the match keeping Québec pinned in their own half, unable to make a meaningful escape.  Bc continued to disrupt their opponents' lineout to great effect and absorbed the Québec pressure well as the clock ticked down.  The pace and intensity from both sides was unrelenting as the game neared the end, but BC looked to have the measure of their opponents.  When the final whistle blew, it was the gold shirts of BC the whooped, cheered and leapt in the air in celebration, winning the bronze medal at the 2018 Canadian Rugby Championships by 20-10.

Head Coach Curry HItchborn: “We got a second chance against a very well coached and well trained Quebec team and made the most of it. They are a credit to themselves, their clubs, schools and their province.” 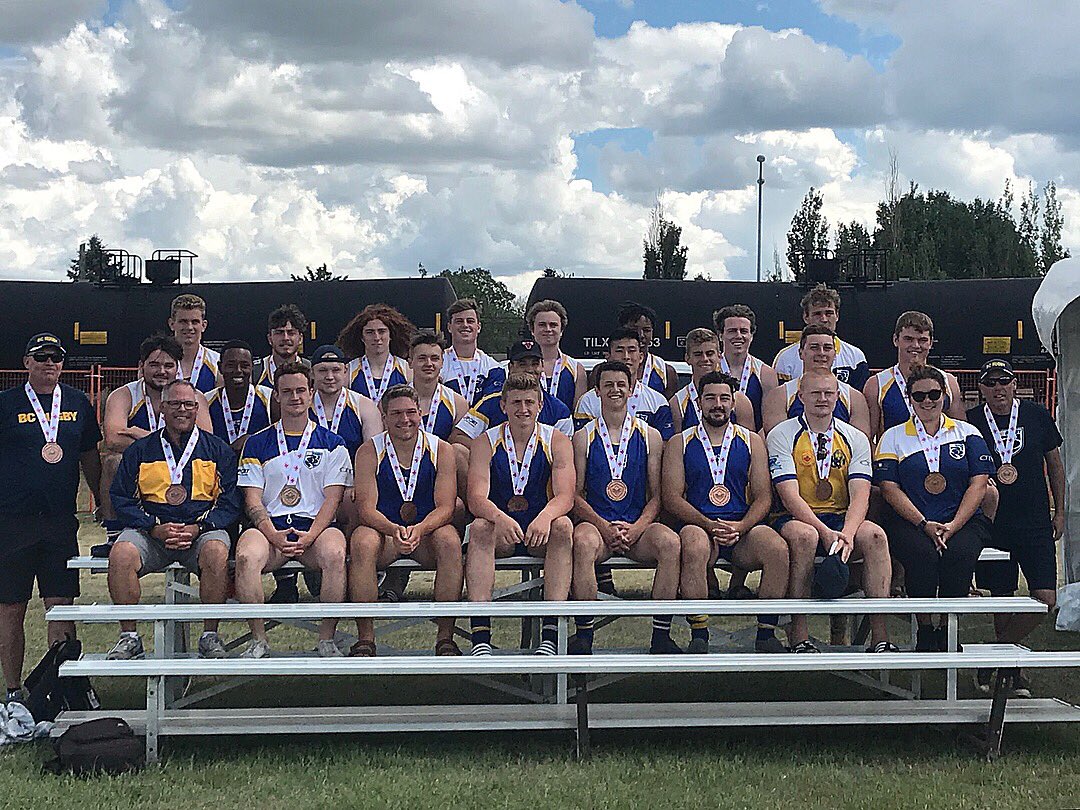 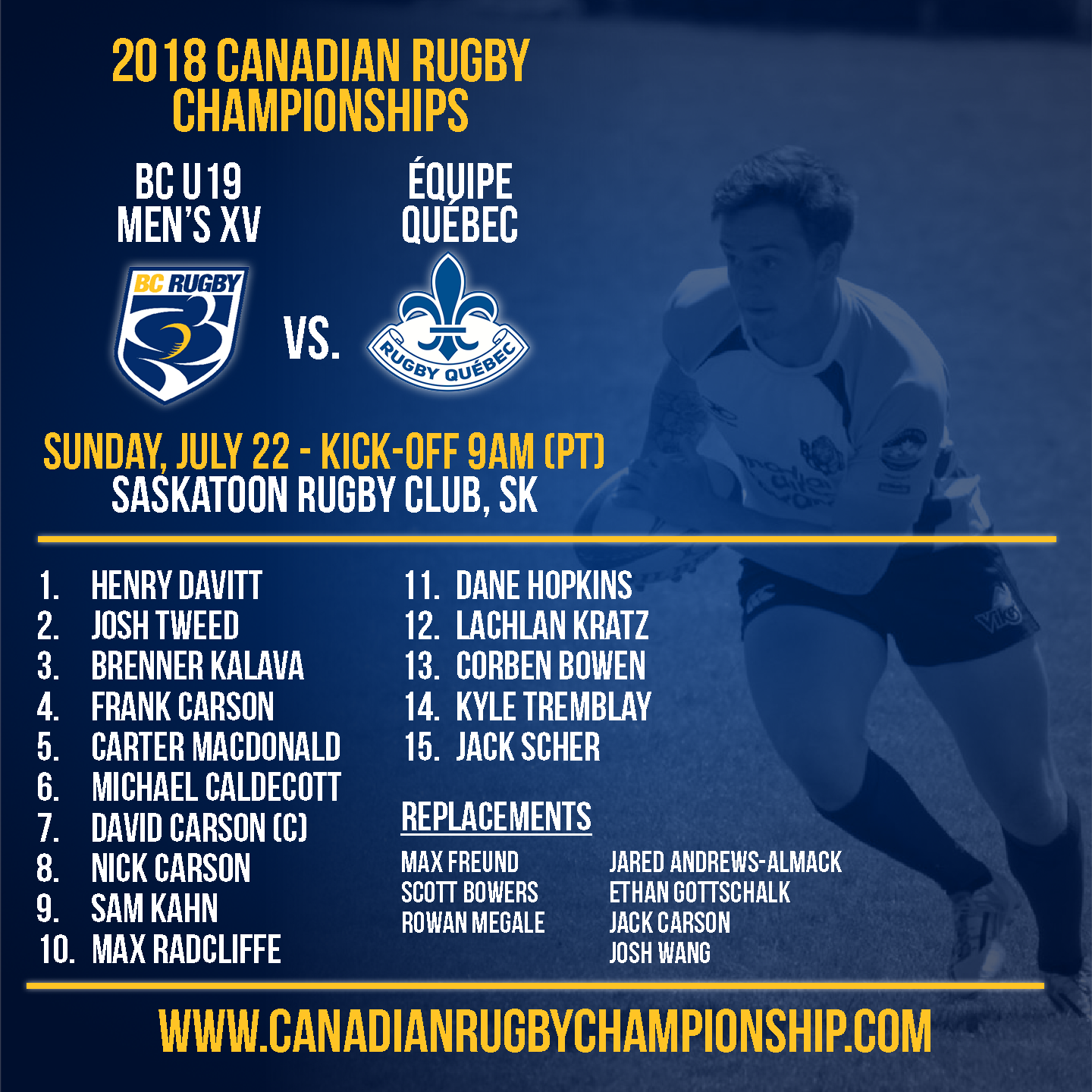 The BC U20 Women’s XV had experienced a real trial by fire at this year’s championships but showed real signs of development from one game to the next.  Facing a formidable Nova Scotia Keltics side, they made a good start of things in the windy conditions.  Keltics scored an early try but BC responded well, pegging Nova Scotia back in their own half and applying pressure.  Eventually, they had an opening, Sarak Klok securing the ball just meters out from the try line and Berlyn Seselja dancing round tackles to ground the ball.  She added the conversion for good measure and levelled the game.

The rest of the first half played out mostly in the BC half, the teams very balanced but Keltics regularly the aggressors.  When BC did get the ball, their pack built some great yards, with Rori Wood and Lyric Atchison producing some wonderful solo efforts. The resilient defence slipped just before halftime though, the Keltics working their way inside the 22 and drawing players into the breakdown before exploiting an overlap out wide.  The kick sailed wide, but Nova Scotia had the mental advantage right on half time, 7-12.

When the game resumed, Nova Scotia had their tails up and attacked hard, BC fullback Faith Fitzpatrick putting in some great try saving tackles.  However, the Keltics were swarming and soon added four unanswered tries to their tally.  BC weren’t giving these points up easily, but playing against the wind had them pinned down in their own half for much of the match and gave Nova Scotia a great platform to attack form.  Credit where it's due though, the BC players never let their heads drop and continued to battle hard.  Emily Baker carried several tacklers with her to gain some much-needed territory and this galvanized the team, rallying in support.  BC pressed for the line with some smash and grab rugby, their pack working tirelessly and soon Sarah Klok reaped the rewards by smashing over the line in the near corner.  The conversion was near impossible given the angle and the wind, but BC had stopped the rot.  The two teams now seemed more balanced again and BC continued to try and press up the field, every player giving a solid account of themselves despite tired legs and aching muscles. While they were unable to get close to the try line again, BC successfully stopped any further Keltics attacks and this resilience, especially after losing four tries in quick succession, is a testament to how the players have grown during this tournament.  While the final scoreline of 12-38 will leave no one in doubt who the winners were, those who watched the match unfold can’t fail to credit the BC U20 team on another improved performance in tricky conditions.

Head Coach Walt Brandl: "The team seems to be just hitting their stride now. It would be nice to have a few games ahead of this tournament so we're not doing our preparation work during the body of the tournament. I've never seen a group of athletes more committed to their off-field preparation." 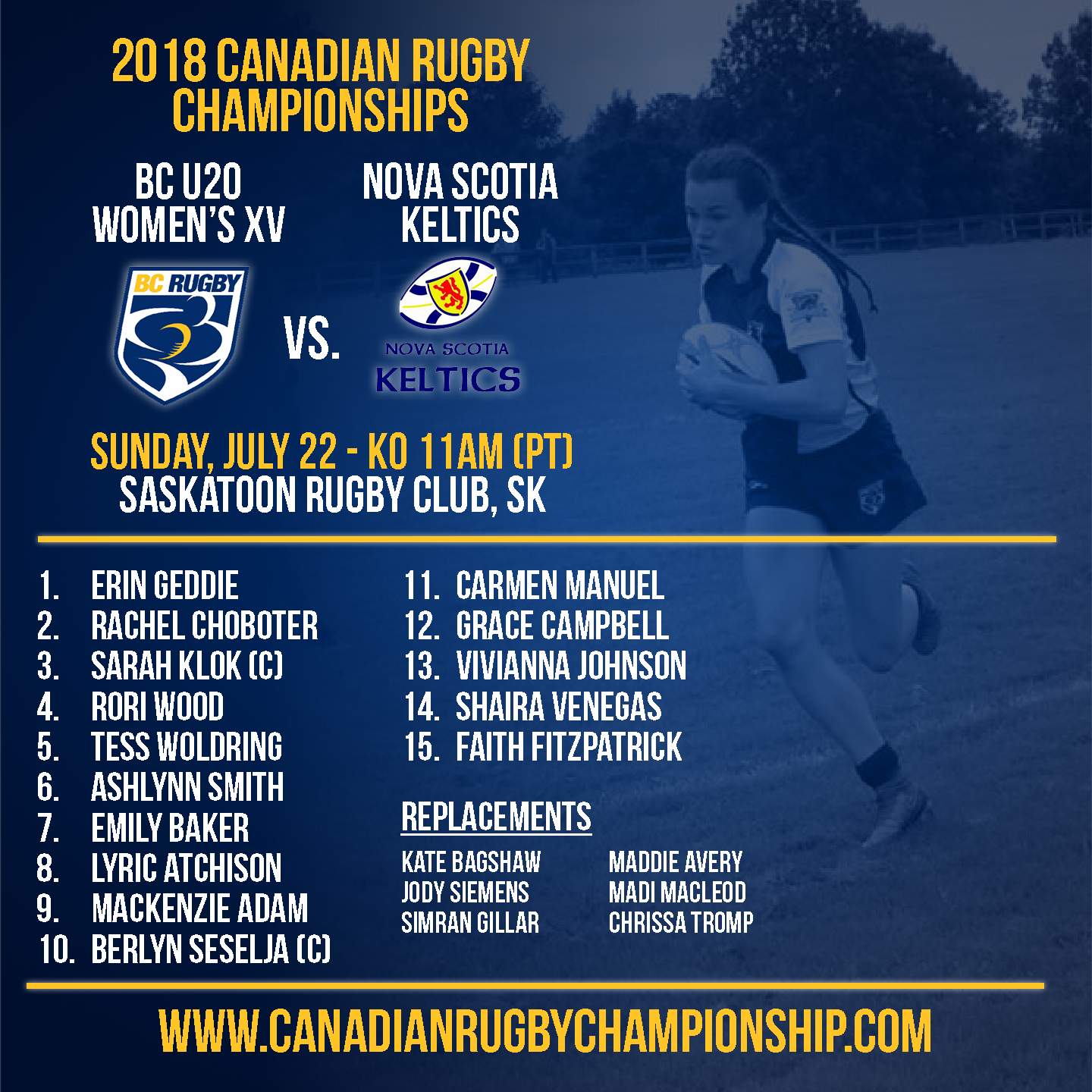 That’s all for the 2018 Canadian Rugby Championships in Saskatoon, but there is plenty more action still to come this summer.  The U16 Western Canadian Championships take place in Kelowna from July 26-29 with 7 BC Age-Grade teams in action.  Also, the BC Bears will open their CRC title defence against the Prairie Wolfpack in Calgary in July 27th, KO 7:00pm.  The Bears will then play their only match on home soil a week later when they face the Wolfpack again, this time at Klahanie Park in North Vancouver, KO 7:00pm  Stay tuned to BC Rugby’s website or social media channels for updates.

If you would like more info, scores or stats from the 2018 CRCs in Saskatoon, visit the tournament website.