Heartbreak as BC Senior Women pipped by Ontario at CRCs 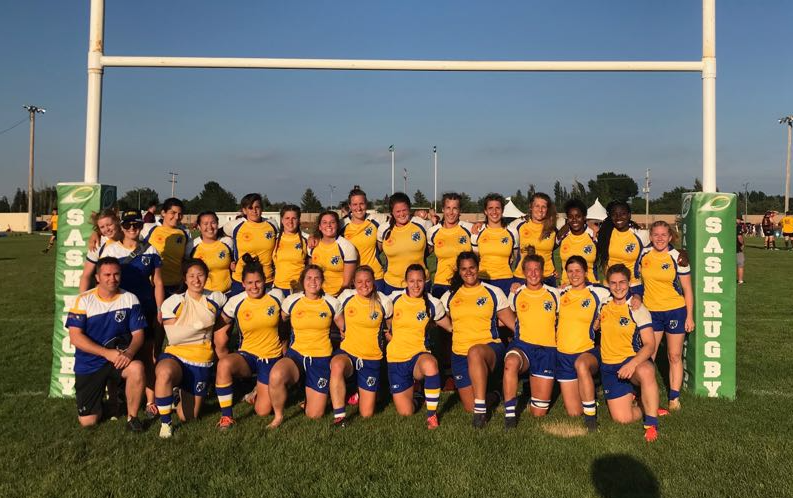 Saskatoon, SK – July 21, 2018: BC’s Senior Women’s XV played their final match of the tournament on a blustery evening in Saskatoon.  Taking on Ontario Blues, the Senior Women were looking for their second win of the championship to keep them in strong contention for third place.  Ontario were yet to win a game coming into the match, but the Blues should never be underestimated.  A strong and gusting wind kicked up dust and kept much of the gameplay from both sides on the ground, but who would emerge victorious?

The BC women, playing in their gold and white livery, started the match well, showing some cohesive phases of play.  Ontario were happy to bide their time, a quick defensive line not giving BC much time to be creative on the ball. An infringement by the Blues gave BC an attacking lineout around 10m out and Valerie Wideski smashed her way across the Ontario try line to open the scoring.  Sya Trafford’s kick was hampered by the wind and BC lead 5-0.  BC had the bit between their teeth and were proving to be more effective in attack, though Ontario still threatened a few times in broken play.  Macy Munson soon added a second try for BC, the third of the tournament for the Kamloops athlete, and this time Sya Trafford slotted home the conversion.

That 12 point advantage must have sparked something in Ontario because there was a visible change in their intensity.  Even without possession, they were performing well as a defensive unit and keeping BC contained.  Valerie Wideski ran some real wrecking ball lines, tacklers bouncing off her, but the momentum looked like it was shifting in favour of the Blues bit by bit.  Towards the end of the half, Ontario found themselves up on BC’s line, peppering the defence with a series of crash ball efforts.  Eventually one of these found a gap in the BC defensive line and Ontario were on the board, 12-7.  There would be no change in the score before halftime, but Ontario were clearly showing they were up for the challenge.

When the match resumed, both sides came out fighting.  The battle waged up and down the pitch, neither side able to gain a significant upper hand on the other.  The Blues threatened down the wings a couple of times, but their biggest threat would come in close quarters.  BC endured a sustained attack on their line, showing exceptional composure in defence as wave after wave of attacks came their way.  Having survived this, they were unfortunate to concede a second try just moments later, the added conversion giving Ontario a slim lead, 12-14.

BC took the hint and proceeded to pull out all the stops.  Charging runs came from players throughout the side, Chanelle Edwards-Challenger, Gabrielle Senft, Macy Munson and Sophie De Goede to name a few.  But really this was a team effort and for every notable solo charge, there were three or four teammates there ready to support.  Against another side, this could have proved deadly but the Ontario defence were on point and only gave up the odd meter here and there.  With the clock ticking down and having spent much of the second half in the Blues’ territory, BC doubled their efforts.  The team opted for an attacking lineout in the dying moments and laid siege to the Ontario try line.  No matter how hard they tried, they couldn’t find that inch of space to squeeze through for a try.  The full-time whistle brought a sudden and disappointing end to a very entertaining match, BC unfortunate not to have come away with the points.  Credit to their opponents though, a very competent display of patience and resilience in defence.

Head Coach Aaron Frisby was upbeat despite the loss, saying “Girls showed a lot of heart out there and it was a complete squad performance. We saved our best performance for last.”  It transpired the team had been beset by some late challenges, Frisby noting that along with the “hurricane winds” they were facing, the team was also subject to a last-minute reshuffle.  “We lost two key players to injury early, had 5 players stuck in an elevator ahead of the match”.  The BC Senior Women’s XV Team may have finished this tournament with a 1-0-3 record, but they have played some excellent competitive rugby, demonstrated by the losing bonus points they collected on the way.  These points still mathematically have them in third place, but this will depend on results going their way on the final day of action at the CRCs. 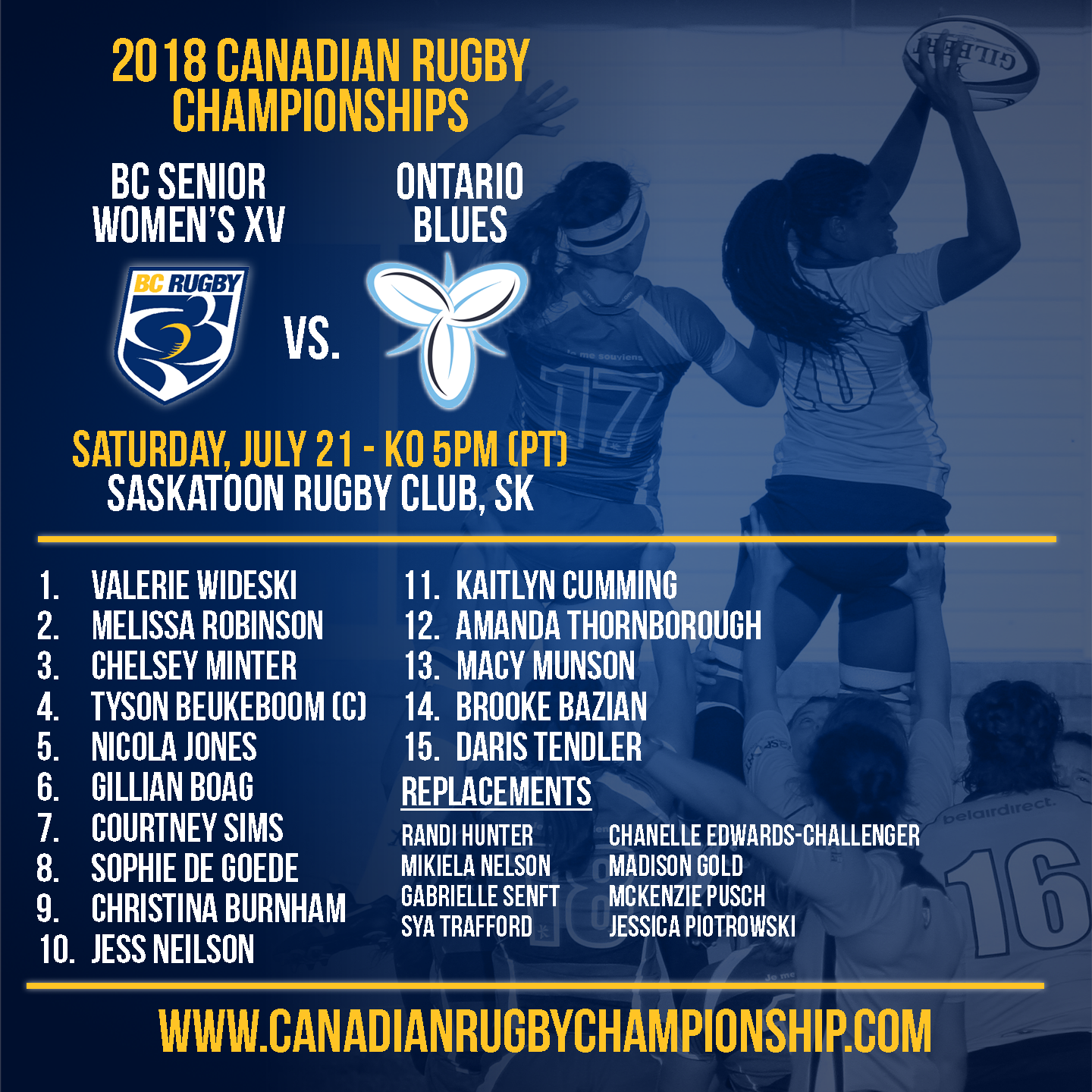 Note - Roster was accurate at 3pm PT ahead of kick off.  Last minute complications meant that the actual roster when the match started was different to what is noted above.

It’s the last day of action at Saskatoon tomorrow and both the BC U19 Men and U20 Women’s XVs are in action.  It’s an early start with the U19 Men in the Bronze Medal match against Équipe Québec (a replay of their opening match of the tournament) kicking off at 10:00am MDT/9:00am PT on field one.  Then the U20 Women will look to build on their improving performance in the championship and secure their first win when they take on Nova Scotia Keltics at 12:00pm MDT/11:00am PT on field two.

If you would like more info, schedules or stats from the 2018 CRCs in Saskatoon, visit the tournament website. Live streams of the matches can be found at objectified.com/webcasting/live-streaming. And why not stay tuned to the BC Rugby Twitter and Facebook channels for team rosters and score updates.

Image – BC Senior Women’s XV, courtesy of BC Rugby