BC Teams suffer defeat in highly competitive matches at CRCs 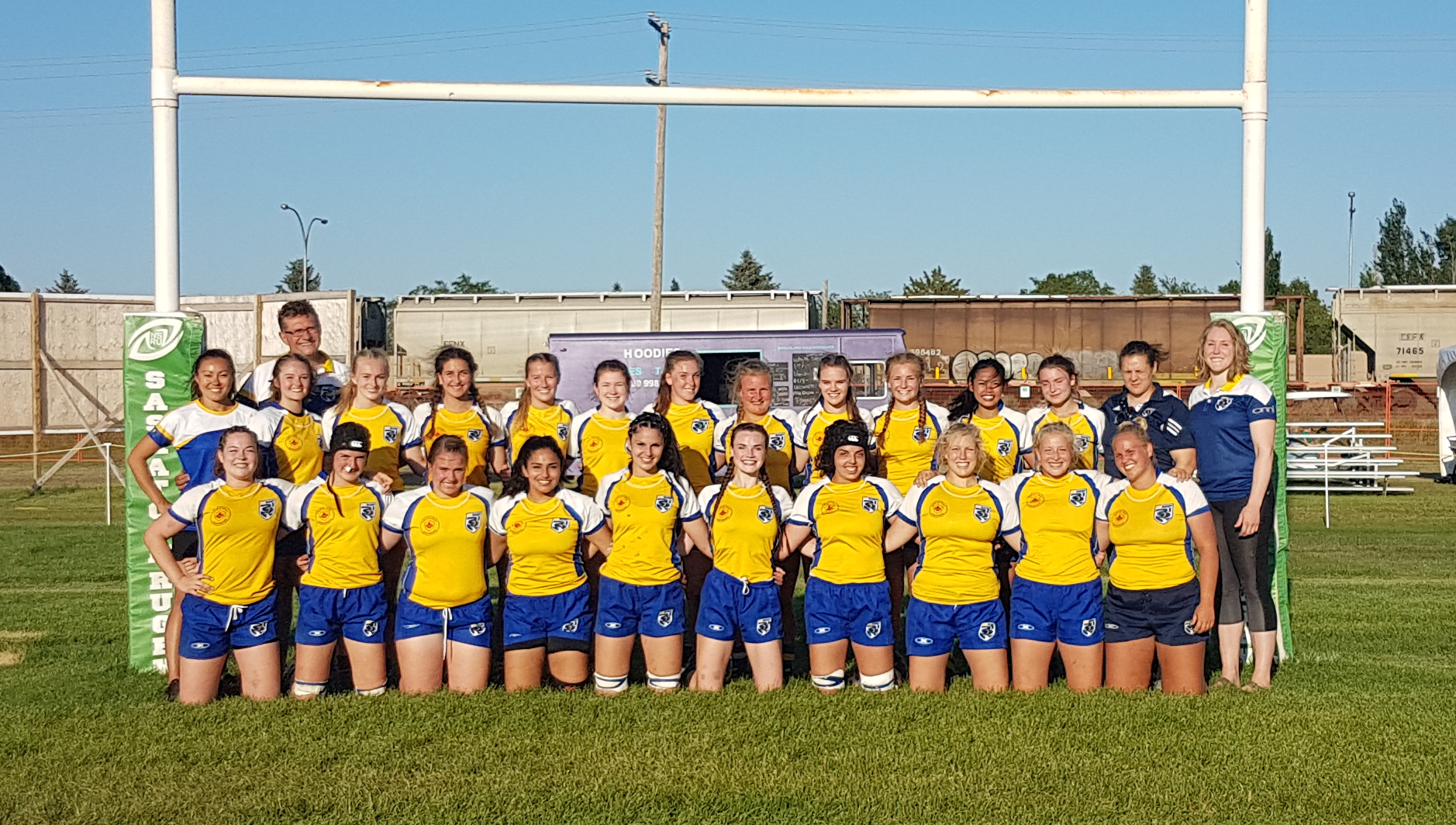 Saskatoon, SK – July 20, 2018: BC’s U19 Men’s XV were back in action today, taking on Atlantic Rock for a place in Sunday’s Final.  The East Coast team had already turned heads at the start of the week with a convincing win over Ontario Blues, so the BC side knew they were facing a tough and capable opposition.  Later on, the BC U20 Women took on Équipe Québec, both sides still hunting for their first win of the tournament.

Atlantic were first off the mark, exploiting a gap in the BC defensive line, they managed to run from inside their own half to secure a try under the posts in the opening minutes of the match.  The kick was good and the Rock had a quick seven-point cushion.  BC would be starved of the ball for large periods of the first half, but their defence was doing a good job of driving Atlantic Rock back towards their own half.  When BC hands did get on the ball, infringements usually snuffed out the attacking chances before the team was able to build momentum.  There were some great charging runs from the BC pack, particularly Frank, David and Nick Carson, all punching holes in the Rock defence.  However, all too often BC found themselves pulling up at the referee’s whistle before they could get to the try line.  While they may not have been able to get on the scoresheet, they did a very commendable job at containing the Atlantic Rock attacks, conveniently assisted by a gusting wind at their backs.  Towards the end of the half, BC conceded a penalty in a very kickable range and Atlantic Rock seized the opportunity, increasing their buffer to 10-0 and that would be the scoreline at halftime.

In the second half, BC felt the sting of the wind, with two restarts going awry as the ball was blown back towards them.  They were quickly put under pressure again by Atlantic Rock who got within sniffing distance of the try line, but an infringement let BC off the hook.  Managing to string together a few more phases, BC showed some great attacking force, Sam Kahn, Cobern Bowen and Lachlan Kratz all stretching the Rock defence but never quite getting over the try line.  Their opponents were still a threat though and drove the point home mid-way through the second half, their #11 managing to drive over the try line despite carrying the weight of two BC players along the way.  A successful conversation meant BC were staring at a 17-point deficit and wondering what it would take to break through the red defensive lines.

A few substitutions seemed to inject a little extra life back into the BC team and they were able to retain possession for longer periods, growing their confidence.  Kyle Tremblay produced a deft run to leave some Rock players hung out to dry and Dane Hopkins turned in a great solo run to boost spirits, but neither resulted in points.  Just as the game was coming to a close, BC found their tempo and self-belief.  Building through a solid set of 10 phases, the ball was moved steadily up the field, a fine display of effective teamwork.  A sharp-eyed Corben Bowen spotted a gap in the Rock’s defence and was more than happy to exploit it, dodging a tackle and accelerating towards the line.  The satisfaction of that score and the conversion added by Max Radcliffe was short lived.  As soon as the kick had been taken, the full-time whistle went.

The BC players will doubtless be disappointed with the result, particularly as they showed right at the end they had the ability to really challenge Atlantic Rock and not just contain them.  Head Coach Curry Hitchborn summed it up well post-match, commenting “We were outcoached, outclassed and worked over by a very strong Rock team.”  This will be a learning curve for this young team though and they still have a chance at a medal at the tournament, playing Équipe Québec on Sunday in the 3rd place playoff.  That match will kick off at 10:00am MDT/9:00am PT on field one and BC will look to exact revenge on the side that snatched victory from them in the opening match of this tournament. 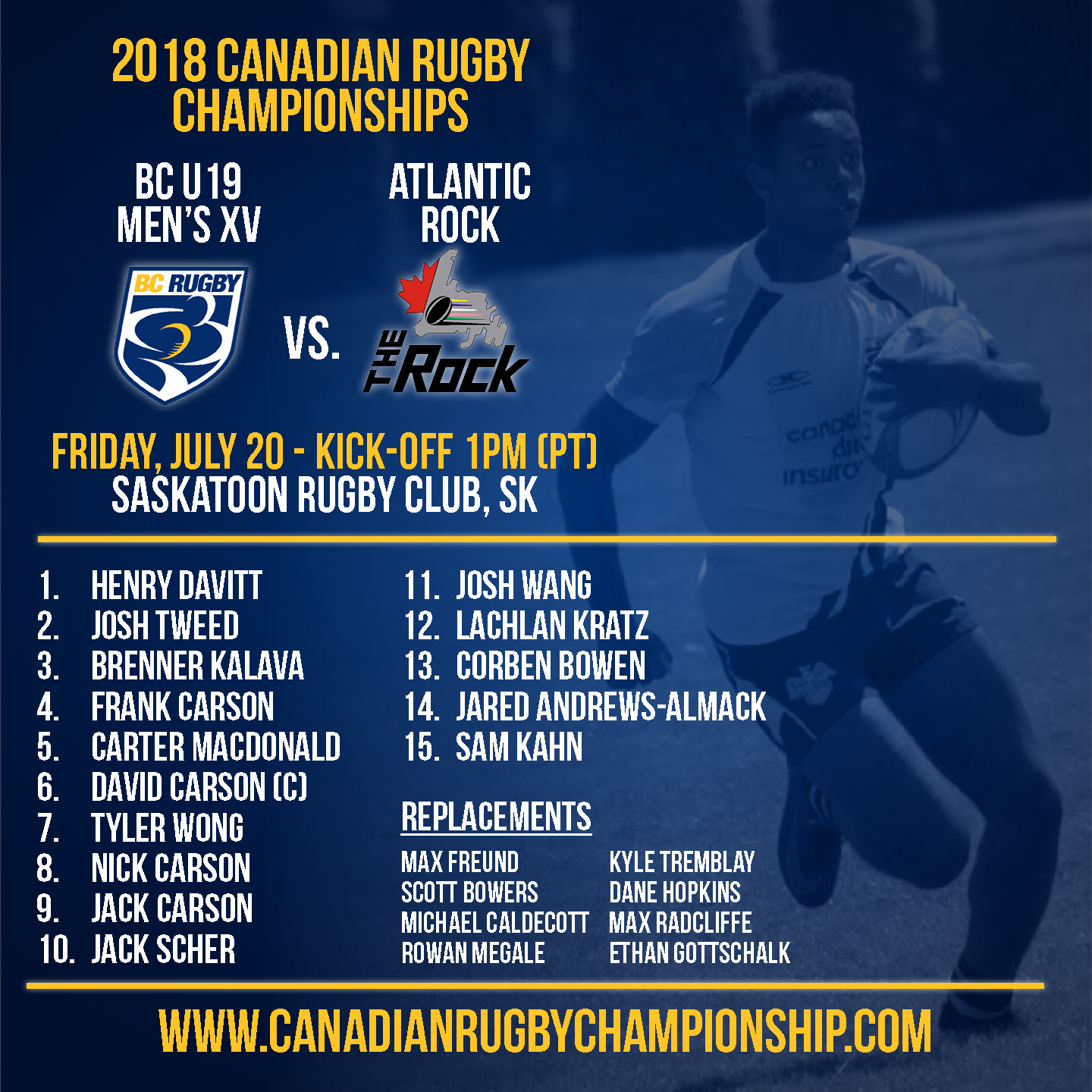 Having experienced two heavy defeats in the tournament already, the BC U20 Women’s XV were looking for an improved performance in their third match.  Opponents Équipe Québec had also lost their opening two matches, so there was a lot of pride on the line. The opening 10 minutes were well balanced, both teams sizing each other up for strengths and weaknesses.  BC started brightly their pack working as a real weapon as they turned over several scrums, #8 Lyric Atchison with some charging runs off those set pieces.  Building the pressure through phases, BC had their opponents on the back foot just 5m from the try line.  A series of attacks were repelled but then Berlyn Seselja seized the opportunity when a penalty was blown and caught everyone napping.  Striking from short range, she grabbed the first points for BC and added the conversion for good measure.

Québec were not about to take this lying down and demonstrated early on their ability to threaten from the wings, a couple of last-ditch tackles from Carmen Manuel keeping BC from conceding.  Switching tactics, Québec took the attack to close range, playing a game of pick and go on the BC try line, eventually finding the smallest of gaps to squeeze through.  The conversion was no good and BC held on to a two-point gap, 7-5.  The rest of the first half demonstrated both teams attacking form, Lyric Atchison and Ashlynn Smith displaying some great smash and grab tactics to gain crucial meters.  Québec managed to absorb these attacks though and neither side added to the scoreboard before halftime.

When the match resumed Quebec sent out a warning shot, instantly pressuring BC and forcing them to work hard to escape their own 22.  Patience and teamwork saw BC slowly grind out some more territory, co-captains Sarah Klok and Berlyn Seselja both leading by example and driving their way through Quebec defenders.  Once again, Québec looked like they would launch their attacks out wide, only to switch focus and use their pack to run a series of pick and go attacks.  They picked up another two tries in quick succession in this manner and soon lead 7-15.  BC found some spark of their own and found themselves in a prime position to attack from close range.  The ball moved efficiently down the line and found its way to Erin Geddie who secured BC’s second try, Berlyn Seselja only too happy to add the conversion.  The game now hung in the balance at 14-15, just one point separating the sides in what had been a very entertaining match.

Credit to Québec though, who saw the danger from BC and made some decisive changes.  The substitutions added fresh legs, but also helped the whole team find another gear.  Starving BC of any real effective possession, tightening up their scrum performance and building through phase after phase of attack, they soon had the bit between their teeth.  Despite some spirited BC defence, Québec were always able to find the right gap at the right time and added a further three unanswered tries to their tally.  The final whistle rang out and in the yellow evening light, it was the women in blue who cheered and celebrated, Québec winning 14-36 in the end.

BC’s U20 Women put in one of their best performances of the tournament so far, the young side showing that they have what it takes to compete for the majority of the match.  Their final game against Nova Scotia on Sunday at 12:00 MDT/11:00am PT will be an interesting test to see if they can continue to build on this positive performance.  “We saw a number of individual players step up their game quite a bit today.  The team understands the task at hand and are focusing on the improvements they can still make” – Head Coach, Walt Brandl 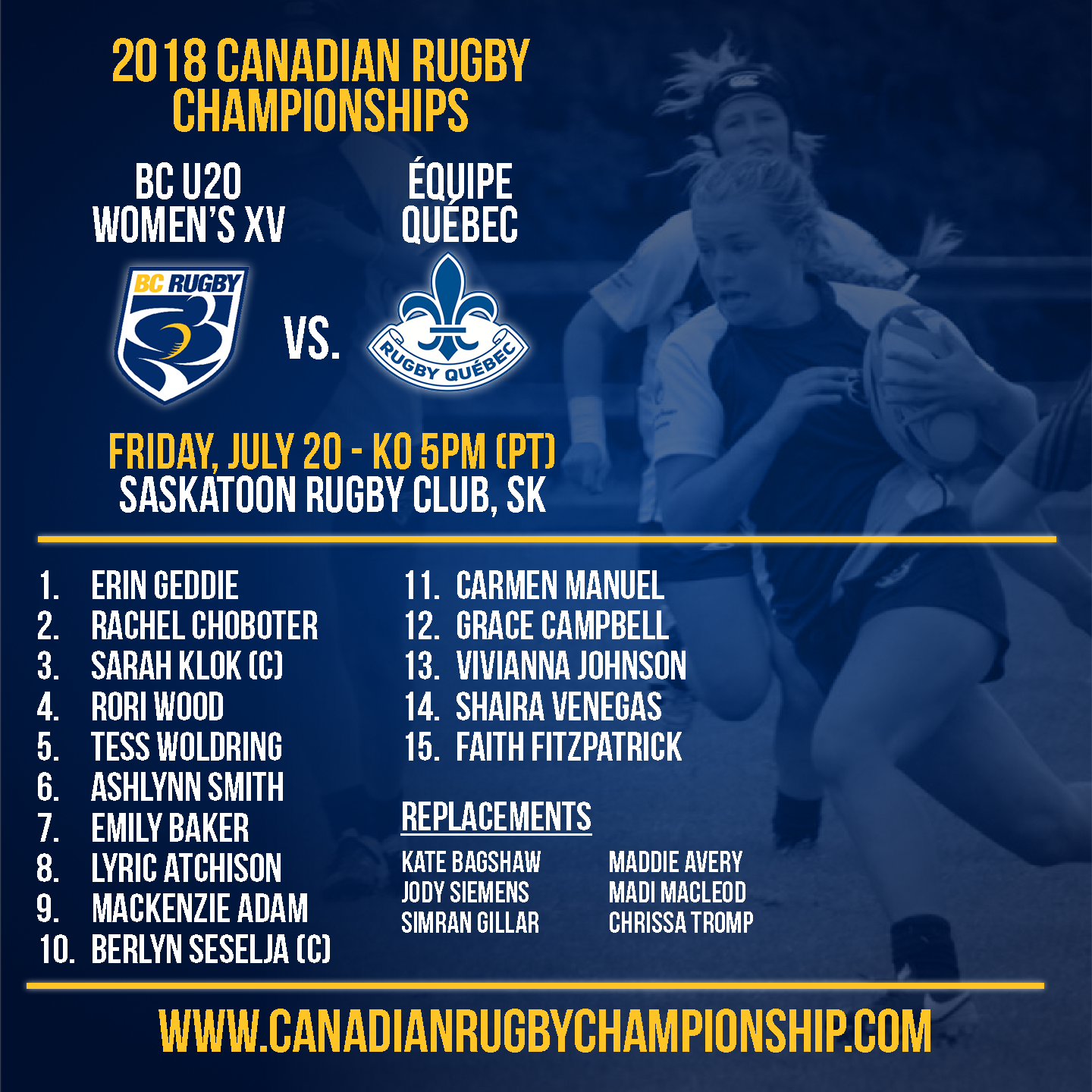 The BC Senior Women’s XV are back in action tomorrow for their final match of the tournament, taking on old foes Ontario Blues at 6:00pm MDT/5:00pm PT on field one.

If you would like more info, schedules or stats from the 2018 CRCs in Saskatoon, visit the tournament website. Live streams of the matches can be found at objectified.com/webcasting/live-streaming. And why not stay tuned to the BC Rugby Twitter and Facebook channels for team rosters and score updates.