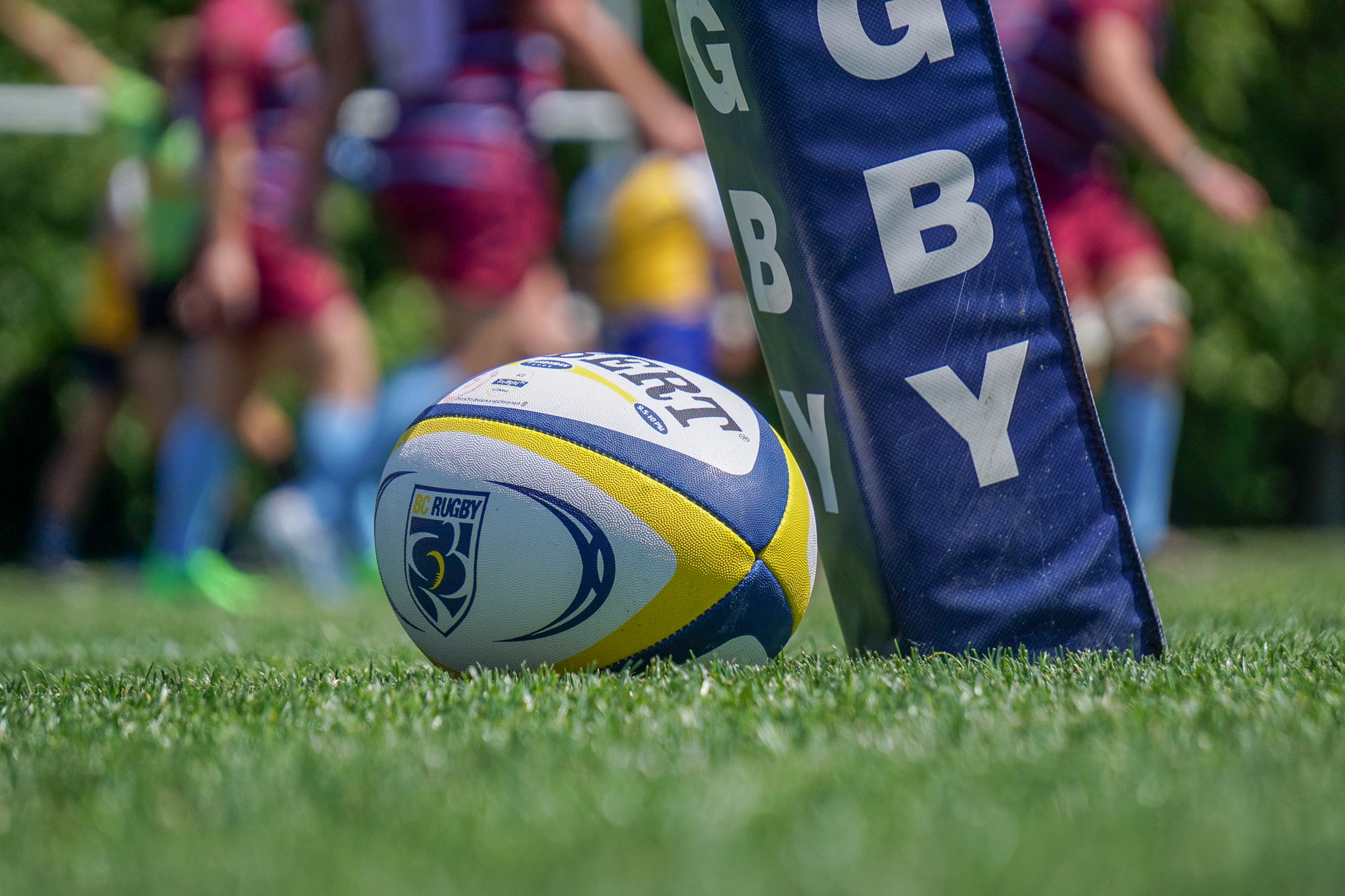 Saskatoon, SK – July 19, 2018: After losing in the final minute to Nova Scotia yesterday, the BC Senior Women really needed to bounce back today in Saskatoon.  The met Équipe Québec, victors over Ontario Blues earlier this week, on a bright afternoon at the Saskatoon Rugby Club fields.

Coming off the back of such a physical match against Nova Scotia, the BC Senior Women were already having to draw on reserve energy.  A few new faces came into this game as it was BC’s second in just as many days. Prop Valerie Wideski, fullback Sya Trafford, and winger Madison Gold getting the start as some BC players got some much-needed rest, at least in the first half. Macy Munson was moved from fullback to outside-centre today in a bid to get her more time with the ball.  Their opponents looked much fresher, clearly benefitting from a day of rest, and set about serving up another hard-hitting game.  Québec’s game plan was to move the ball wide to one of two speedy wingers and capitalize, a tactic that worked with ruthless effectiveness just a minute into the match. Munson gathered a few more powerful runs today, but BC's opportunities were all too often cut short via one infringement or another.  As was the story with yesterday’s game against Nova Scotia, BC would take the ball into the opposing half, but then ultimately surrender possession, often being outplayed at the breakdown by a ruthless Québec pack. It was too bad because this BC team has a lot of potential, but is struggling to put all the phases together and execute a full game plan.

Québec had the majority of ball possession in the first half and shared the ball well, dangerous wingers at both sides kept the BC players on their toes. After BC put together a nice string of phases in the Québec end, the ball was unfortunately lost due to a knock-on. At halftime, the score was 17-0 Québec.

After the halfway mark, BC came back with a bit more spirit. A nice run by Amanda Thornborough led to some sustained pressure by BC in the Québec end. Unfortunately, another penalty at the breakdown sent BC backwards again. After BC was awarded a penalty and kicked to touch, their lineout came down and a drive ensued, Randi Hunter securing the points as BC tumbled over the line. Québec would add on a penalty kick very close to the posts to make it 27-5 before going on to add another try to make the final score 34-5. A tough loss for BC when they were surely pushing for a win. A tough tournament schedule to be playing two games on consecutive days, but Québec came out flying and seemed to keep their level of play elevated throughout the whole game, while BC staggered.  Head Coach Aaron Frisby was understandably frustrated and disappointed for the team, "We didn't play to our strengths or their weaknesses."  The side now has a day of rest, much needed after two hard matches.  They will face Ontario Blues in their final match of this year's CRCs on Saturday evening at 6:00pm MDT/5:00pm PT.  A win in that match and other results going their way could still see the team finish in the medals this year, so expect to see an all or nothing display. 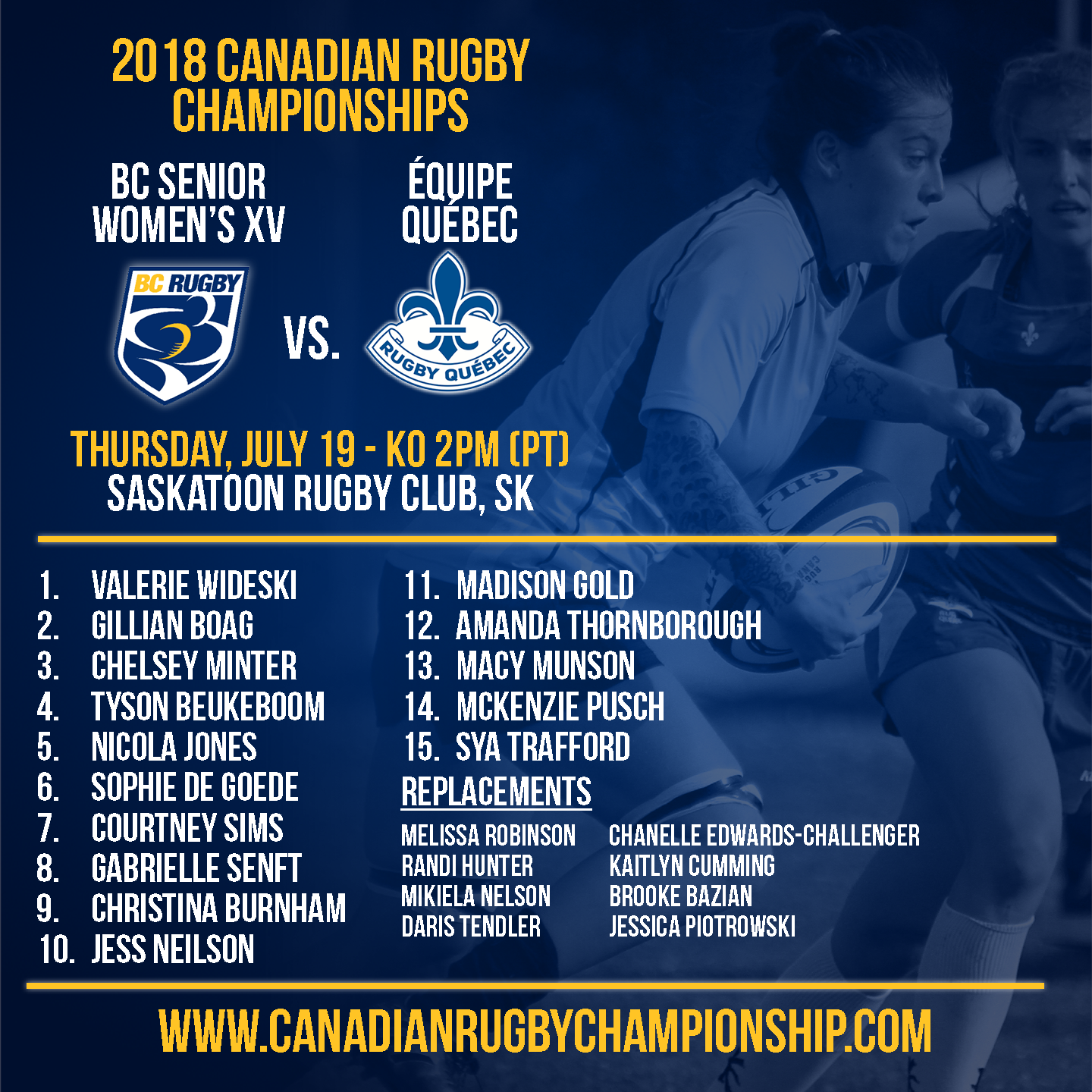 The BC U19 Men's XV are back in action tomorrow.  Having finished second in their pool, they will face a formidable looking Atlantic Rock at 2:00pm PTD/1:00pm PT, playing on field two.  This will be the semi-final of their tournament and a win would see them face either Équipe Québec or Ontario Blues in the Final.  Make sure to tune in to the live stream for all the action.