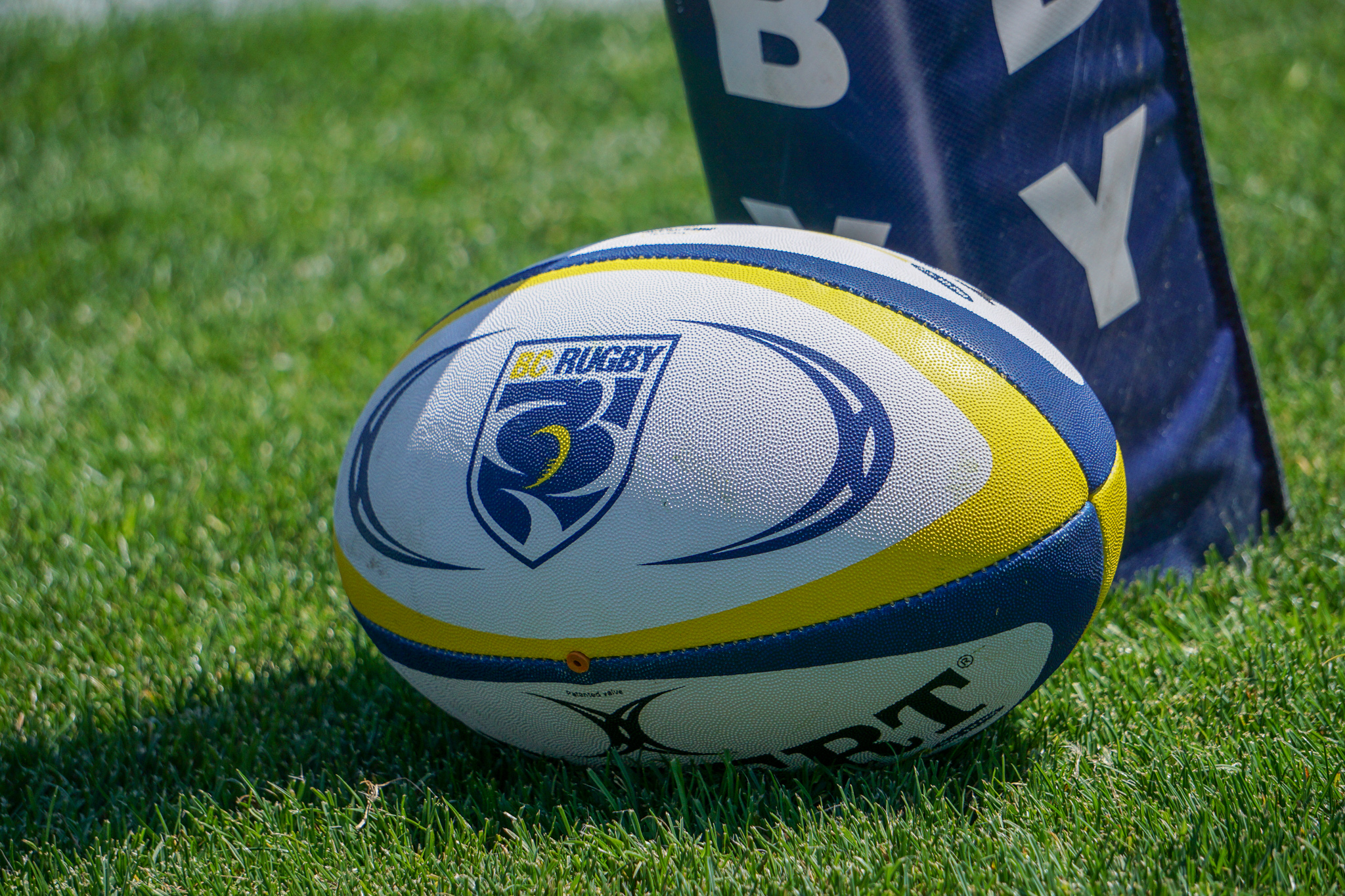 Saskatoon, SK – July 18, 2018: Day three of action at the 2018 Canadian Rugby Championships in Saskatoon saw both of the BC Women’s XV teams back in action, The U20 Women taking on Alberta Wolfpack while the Senior Women would face Nova Scotia Keltics.  We’ve got an account of both matches for you below.

BC started brightly, looking to shake off the memories of their opening defeat to Ontario Blues.  Early signs were good, spearheaded by creative attacking play from #9 Berlyn Seselja and BC cycled through the phases and gained ever more ground.  Their opponents, Alberta Wolfpack, soon found their own form and the two sides seemed well matched for the first quarter of the game.

BC’s Fly Half, Grace Campbell put in a great tackle just outside her own 22m line, allowing teammate Vivianna Johnson to rip the ball from Wolfpack hands and sprint away for a 60m solo try.  The windy conditions made kicking challenging and the conversion drifted wide.  If the Wolfpack weren't fully awake from the start, that opening score from BC really lite a fuse under them and soon the spectators were about to see exactly how clinical the Albertan ladies could be.  Spotting an overlap on the near side, the ball was quickly shipped wide and BC could do little to stop their opponents drawing level, 5-5.

The Wolfpack lineout was misfiring early on, giving BC the chance to mount a few attacks but handling errors would stop these chances before they could amount to any points.  Once again the Wolfpack players absorbed the BC pressure and then unleashed their own attack, once again finding the pace in their backs an effective tool against the BC defence.  As the first half drew to an end, the ladies in the black and pink shirts were clearly building in confidence, regularly breaking through the first BC tackle and able to offload the ball more effectively.  Right before halftime, the Albertan lineout finally clicked in to place.  As it happened, this was right on the BC 5m line and it proved to be timely, the Wolfpack maul rumbling over the line for try number three.  The halftime score stood at 5-15, advantage Wolfpack but BC still very much part of the contest.

The second half of the match proved to be a much more one-sided affair.  BC continued to push, hard but their opponents had found another gear and were putting the pedal to the metal.  Some key substitutions added more strings to the Wolfpack bow and soon their forwards were charging through BC’s defensive lines.  With excellent supporting runs from their backline, the Wolfpack were able to add a further two tries and a conversion to their tally, giving them a comfortable gap, 5-27.  Proving that they weren’t done fighting yet, BC found their form again.  Taking advantage of an attacking scrum in the Wolfpack half, #8 Lyric Atchison produced a delightful pick and go, breaking through several tackles before reaching for the line and snatching back a try for BC.  Berlyn Seselja ably kicked the conversion to add two more points.

The response from the Wolfpack was swift and decisive.  Almost immediately they responded with a try of their own to push the gap back beyond 20 points and from then on there was no stopping them.  BC never capitulated, continuing to throw bodies into contact and half the tide of pink and black, but they were unable to contend with the pace, power and precision of the Wolfpack, whose confidence seemed to grow with every passing minute.  The Albertan side would add a further three tries to take their total tally up to nine for the match, sealing a comprehensive 12-49 win.  The BC women should take heart from their performance though as they showed real commitment right until the end, and could well have made it a closer match had they taken their chances in the first half.  A day’s rest now awaits weary bodies before they face Équipe Québec on Friday at 6:00pm MDT/5:00pm PT.

Coach Walt Brandl had this to say after the match, “the team took a big step forward today.  Our defence needs improvement, but that’s something we can work on tomorrow.  We were much more competitive in all phases of the game compared to our first match and we expect another big improvement on Friday.” 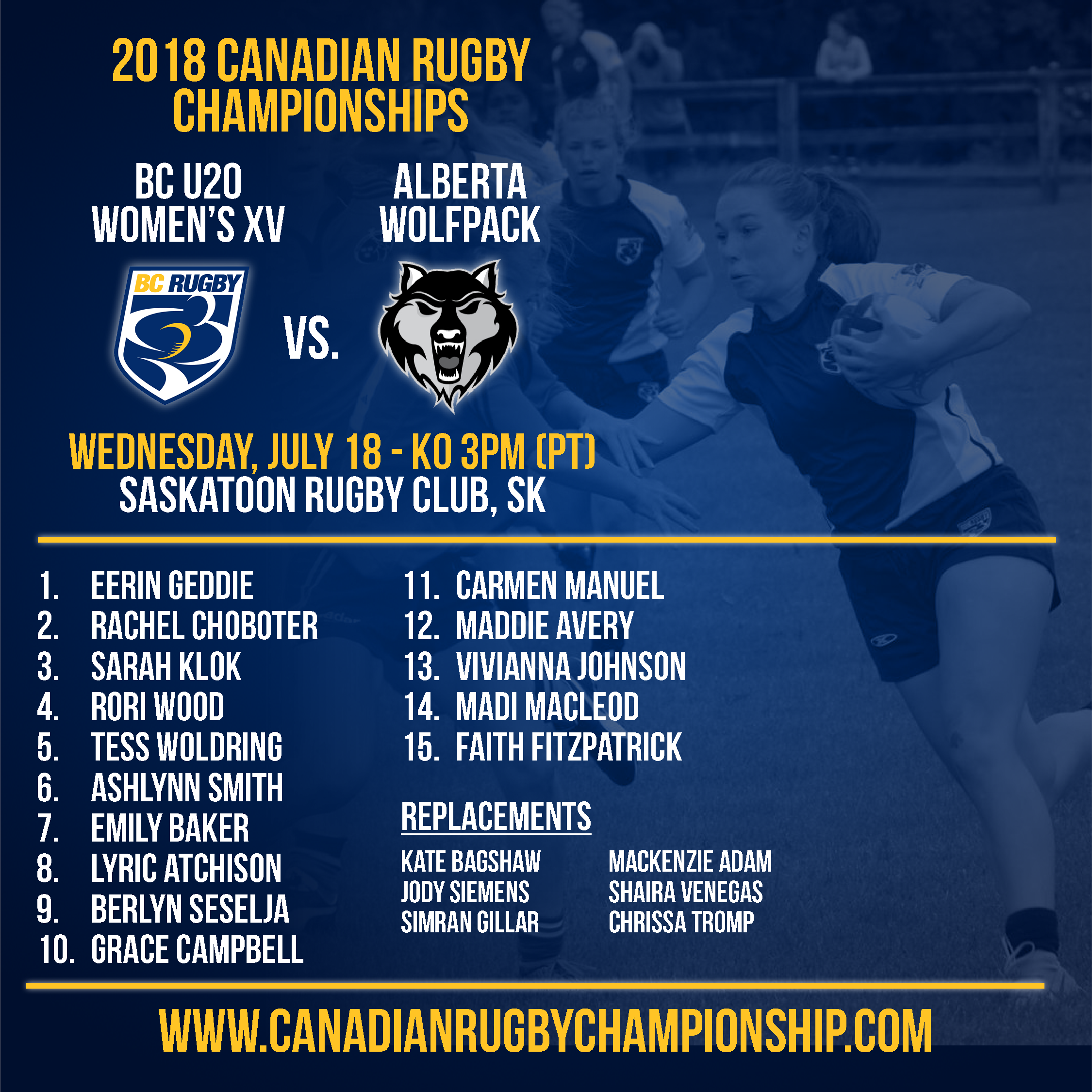 The BC Senior Women took the field again in Saskatoon today, ready for their second match of the CRC tournament. With a win on Monday against the Prairie Wolfpack, they were looking to make it two in a row versus the Nova Scotia Keltics. This game was quite a back and forth affair, with both teams trading time in each other’s end. However, Nova Scotia was able to hold more possession in BC’s end for the majority of the game. A series of offloads by Nova Scotia lead to them camping out on BC’s try line early in the first half. Macy Munson displayed wonderful tackling form when she launched a Nova Scotian player away from the line. However, after a few short pick and goes later, Nova Scotia were able to fall over the line to make it 5-0.

After Nova Scotia conceded a penalty, BC kicked to touch and found a favourable position in their opponents’ end. Off of the lineout, an impressive display of hands led to BC’s first try being scored on the opposite side of the field, courtesy of Macy Munson. Things were now evened up at five points apiece. BC put together lots of nice phases in the middle of the first half but unfortunately lost the ball due to being counter-rucked or taking a penalty. The remainder of the half saw both teams going far in each other’s ends, Nova Scotia threatening and retaining most of the possession. The score would remain tied going into halftime.

BC showed some great pace off the top of the second half, running onto the ball with depth and speed, looking like a new team. However, after the Keltics regained possession they got close enough to the BC line to deliver some more pick and goes and short gains by the BC try line. Nova Scotia scored again by grinding away, one pick and go after another until they touched it down.

A really nice run by Andrea Burk seemed to spark life back into BC and the women in gold and white took it deep into the Nova Scotia half. After being awarded a penalty and kicking downfield, BC found themselves near the try line and stretched the ball wide across the whole field. It looked like Nova Scotia might be able to shut BC out here, but Sophie de Goede charged over the line and scored a try. The score was tied 10-10 now. The conversion attempt was very close and went off the post, which would prove crucial.

BC showed their class with some really nice ball handling in the Nova Scotia end which was capped off by a try by #8 Gabrielle Senft. Now, holding the lead 15-10, it looked like BC was in control of the game. Nova Scotia had other plans though and took the ball right at BC. The opposition were no slouches and moved the ball just as ably as BC, demonstrating good hands and creativity. Once again, Nova Scotia worked the ball very close to BC’s try line and focused on retaining it with short charges close to rucks. BC defended very well, and the referee called for one-minute remaining. BC was called out for not being onside and the referee played a continued advantage. Phase after phase of Keltic pick and goes led to their backs hollering for the ball. At this point, they swung it wide and one of their centres gathered enough pace to take the ball over the line, right under the posts. The placing of this try would be all the difference as no other conversions were made on the day.  This one went over, securing the win for Nova Scotia Keltics and breaking BC hearts all in one kick of the ball.  Final Score, 17-15 to the Keltics.

Coach Aaron Frisby said after the match, “It’s hard to play rugby when you haven’t got the ball. They did a great job of starving us of possession.”  To add salt to the wound, BC’s Senior Women will have to recover and pick themselves up quickly as they face their second match in as many days at 3:00pm MDT/2:00pm PT tomorrow, taking on Équipe Québec on field 1. 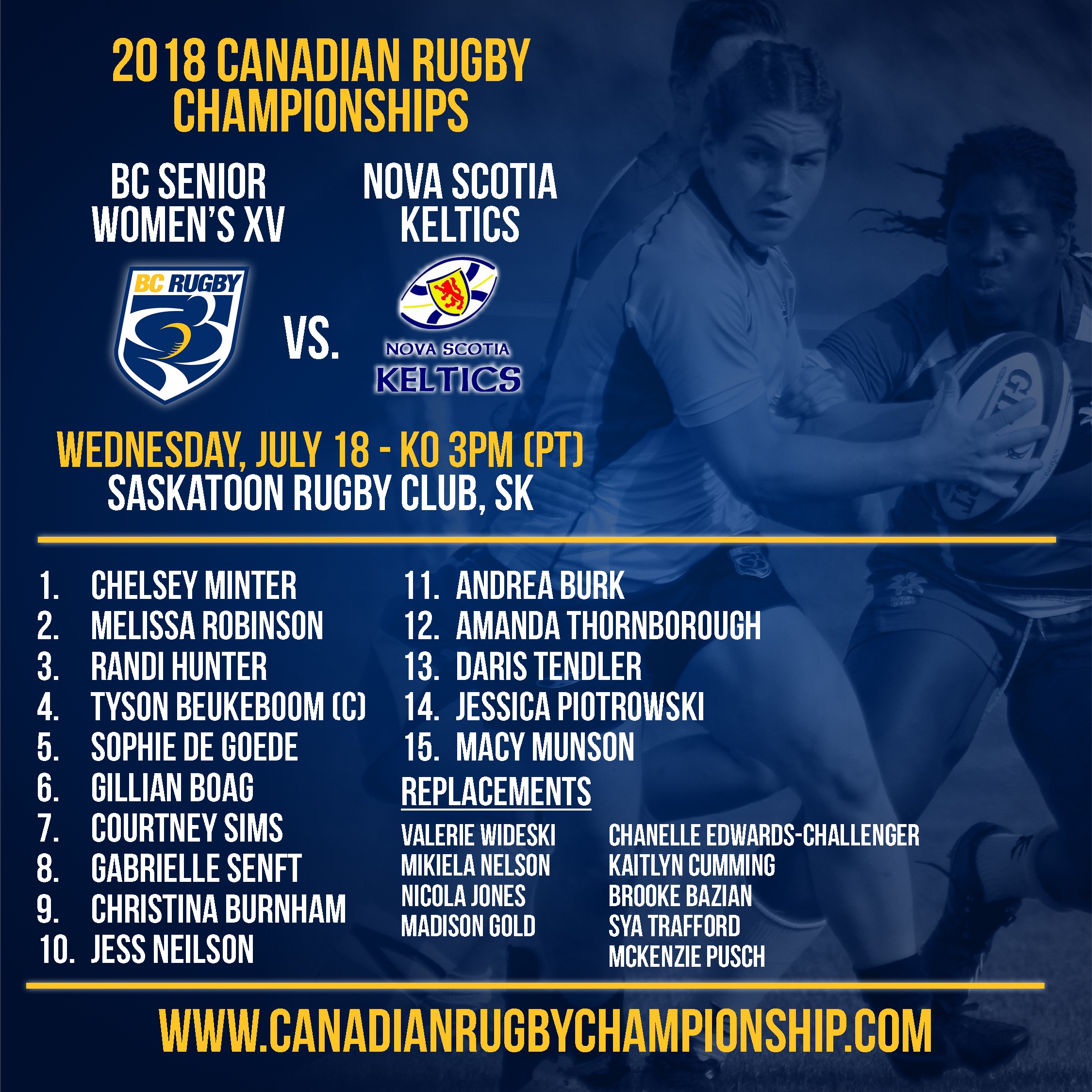