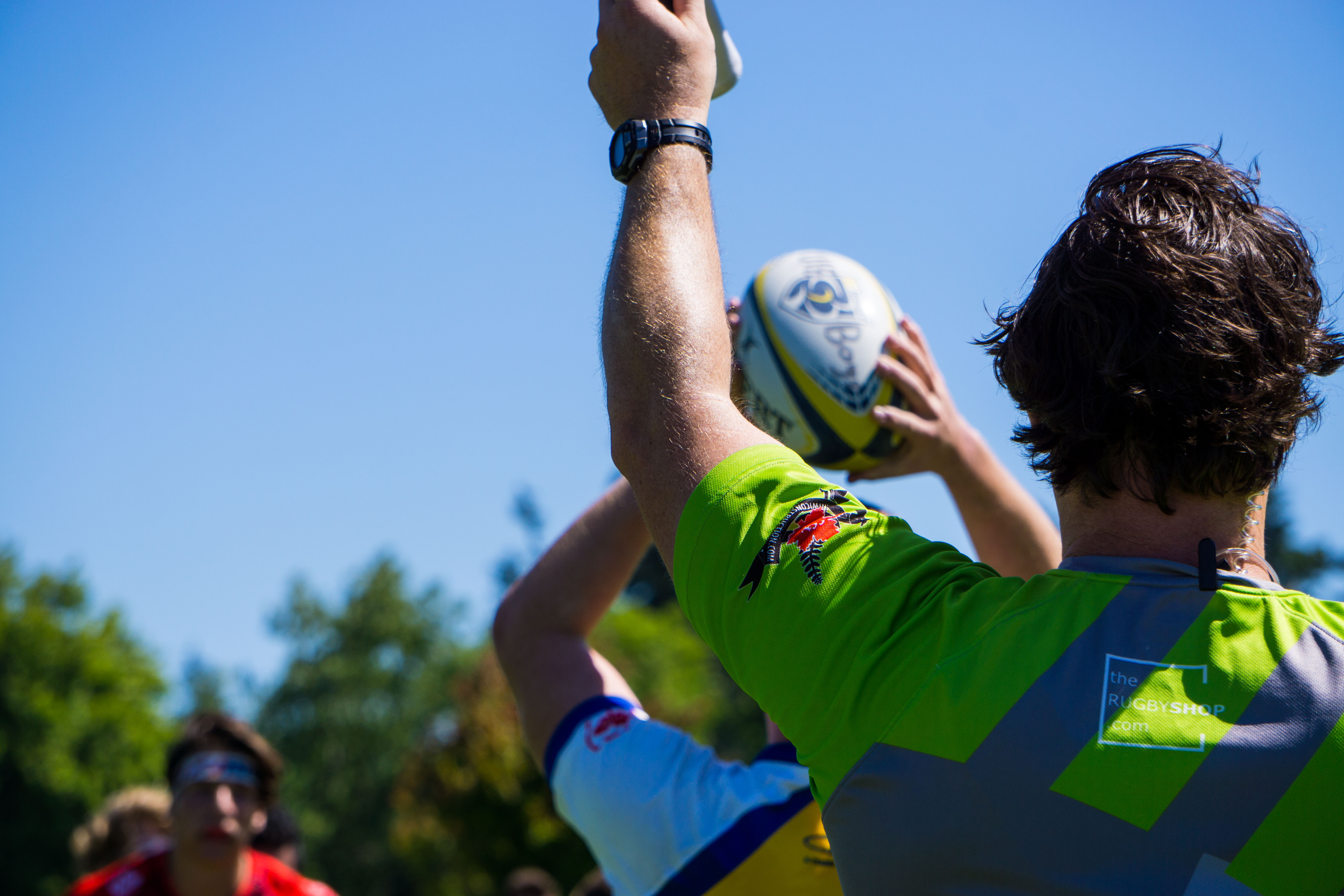 Saskatoon, SK – July 17, 2018: After the action-packed triple-header of action yesterday, it was just the U19 Men's XV that took to the field to represent BC on day 2.  Following a narrow loss to Équipe Québec, the team had to quickly shake off any self-doubt and refocus for a match against the ever challenging Alberta Wolfpack.  The BC players would have at least one ace up their sleeves: they were already battle hardened, this would be their opponents' first match at the 2018 CRC.  What would prove more helpful, fresh legs or experienced heads?

Two games in two days is tough on any rugby team and in the words of Coach Curry Hitchborn, this was a "must-win match". Alberta would prove a worthy foe in the first half keeping things tight for BC. They applied lots of pressure in the first ten minutes and made BC’s defence work right away. Despite a few able runs into the Alberta half, BC was unlucky to knock the ball on in the final moments of attack. Flanker, Tyler Wong, of North Vancouver, made good on one of these opportunities though, taking a ball with pace over the try line for BC’s first score. A few minutes later, outside-centre Corben Bowen of Chilliwack sealed the deal with a dashing run down the sidelines, making the score 12-0, BC. Alberta answered though with a try and conversion of their own. When Alberta was penalized in their own zone, Jack Scher took the opportunity to kick for points. Scher’s foot was to prove almost flawless today and he knocked this one in, making the score 15-7. That’s where it would stand at halftime.

Alberta put the pressure on BC early in the second half, trying to claw back in and BC allowed them by gifting a few penalties. When one BC player infringed at the ruck, the whistle blew, and Alberta kicked for points, score: BC 15-Alberta 10. After an Alberta lineout did not go straight, BC was given the ball for a scrum and an attacking opportunity. Big #8 Nick Carson, from Castaways, picked the ball off the back and had a rumble towards the Alberta try line. After he was taken down, #10 Jack Scher ably passed down the line where it ended with North Vancouver winger Josh Wang going over for the try. Scher had his work cut out for him with the conversion which was a few feet away from the sideline but notched the kick in. The score now was 22-10 for BC and Alberta’s control was slipping away. BC attacked again off a lineout and swung a miss pass through their centres which ended in a try. The score now as 29-10, BC would add ten more to finish it up without a response from the Wolfpack.  A final score of 39-10 will doubtless have pleased the whole side, players and coaches alike.  Hitchborn was quick to praise the attitude of his players, saying "Full credit to the boys, they earned that win as a team".  Will this spark more self-belief into the side going forward?  Time will tell.

This was a pleasing result after yesterday’s close to defeat to Quebec. This BC team still has problems taking penalties and today’s referee echoed yesterdays with complaints about high tackles. They also need to make more ground forward in the middle of the field amongst their centres, we saw some bright instances of this today and the results were rewarding.  Despite a 1-1-0 record so far, BC are sitting pretty atop their group after day two thanks to a couple of bonus points.  How they will ultimately finish the group is now out of their hands, but they have made a good effort on damage limitation.  Quebec will face Alberta tomorrow at 1:00pm PT to determine the final group standings and as a result, which semi-final spot BC could occupy.  The semi-final matches will be held in tandem on Friday, Jul 20 at 1:00pm PT and we'll keep you updated with the U19 Men's XVs fate. 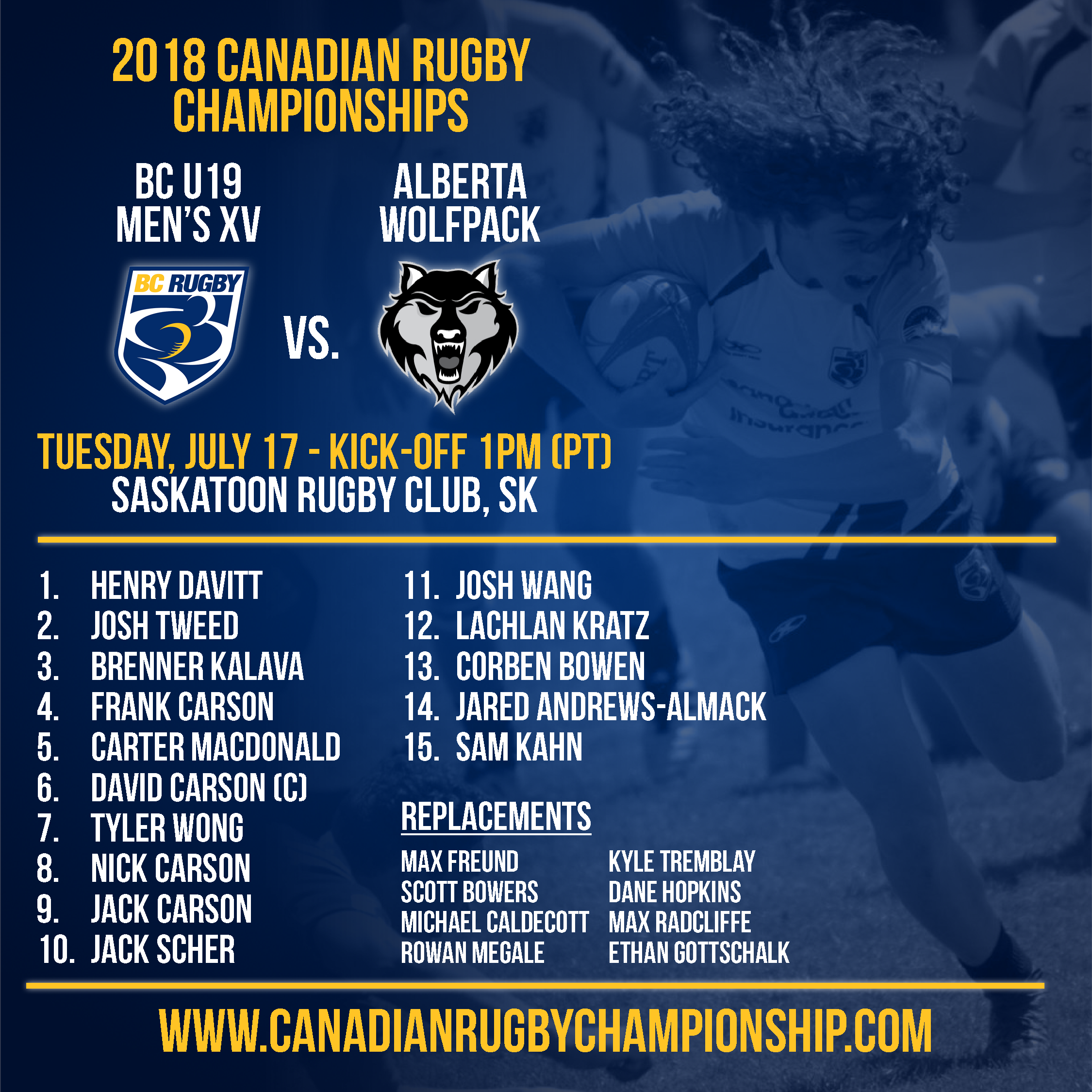 The ladies of BC are back in action tomorrow, the U20 Women taking on Alberta Wolfpack while the Senior Women take on Nova Scotia.  Both sets of opponents have already tasted victory at the tournament, so it's up to the BC women to spoil some parties.  The games both kick off at 3:00pm PT and will be streamed live (U20 Women on field 2, Senior Women on field 1).