Mixed fortunes for BC Rep Teams on Day 1 in Saskatoon 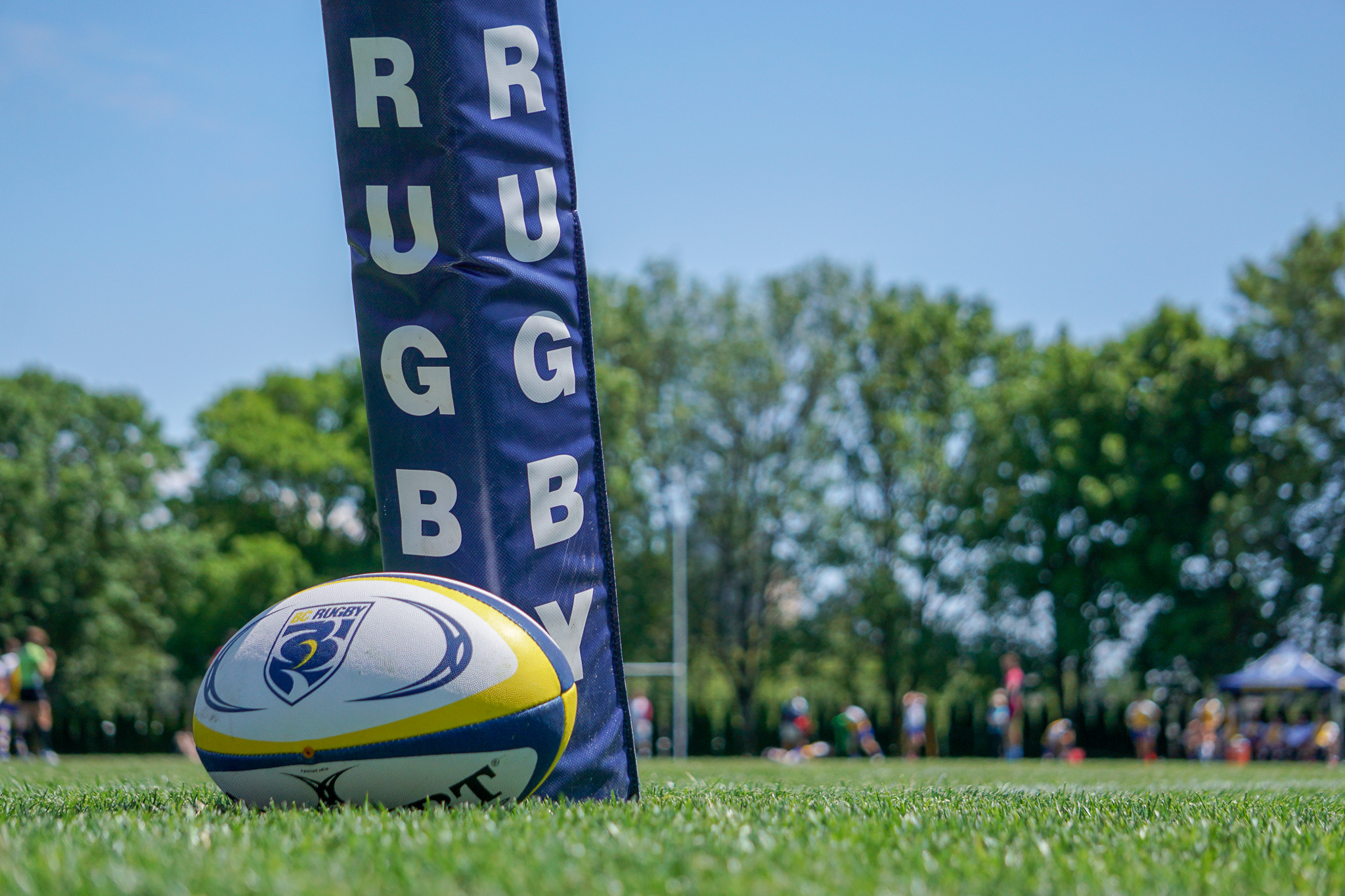 Saskatoon, SK – July 16, 2018: The opening day of the 2018 Canadian Rugby Championships in Saskatoon was action-packed, with BC teams competing in all three divisions, U19 Men, U20 Women and Senior Women.  On a bright but breezy day, the teams experienced mixed fortunes as they faced off against Équipe Québec, Ontario Blues and Prairie Wolfpack respectively.  If you weren’t able to watch the matches live, we’ve got a roundup of all the action right here.

The team from the east came out of the gate hard and dominated the first half. BC seemed unfocused and undisciplined in their game, conceding several high tackle penalties, eventually resulting in a yellow card for flanker, Frank Carson. The problem was retaining the ball for extended periods of time, which left Québec with lots of time to execute. Expansive ball movement by the Québec squad stretched the field and kept play alive for them.  BC defended well, but the penalty count against them was mounting and their opponents were more than happy to capitalise.  By half-time, the score was 14-3 to Québec.

Off the top of the second half, BC looked like a changed team, much more cohesive and motivated. Off the back of an attacking scrum, BC’s Jack Carson picked up the ball and infiltrated down the blindside to score BC’s first try. This lit a fire under the BC squad and they played with a pace that was unseen for the first 40mins. Québec responded with a penalty kick to reduced BC’s gain. After the Quebec side was penalized for coming off their feet in the ruck, BC kicked and found touch. The resulting lineout was completed with a drive by the forwards resulting in a try from Tyler Wong, converted by Jack Scher, leaving the score 17-15 for Québec.

Now, completely reenergized, the BC squad took the ball with pace and veracity into tackles and the opposing side. A BC sprint down the wing took them deep into their opposition's half and a resulting high tackle handed BC a penalty.  The resulting kick and go led to a try, BC leading 20-17. After this, BC’s outside-centre, Lachlan Kratz received a red card, something BC could have done without in such a delicately balanced game. Playing with one man down, BC defended extremely well and looked very much like they would hang on for the win. Québec mounted an attack in the BC end with under five minutes to go, their forwards keeping the ball in close quarters, retaining possession well. Eventually, these picks sucked in BC’s defence and Québec switched the attack out wide, crossing the line to score in the corner. The kick was good and that was full time. A tough loss for BC in a game that they were slow to start but eventually showed some real talent. The penalty count was the biggest issue and the team could do without making extra work for themselves as the tournament continues.  BC will have to perform a quick turnaround as they take on Alberta Wolfpack at 2:00pm MDT/1:00pm PT on Tuesday.

Coach Curry Hitchborn had this to say after the match, “Full credit to Québec, they played a solid game plan and were well coached. Their players adapted to conditions well and played a simple brand of rugby that benefitted them in the match. Disappointing to start with a loss. We could have prepared better for this match, now we’re back to the drawing board. We now face a must-win situation, which is never ideal.” 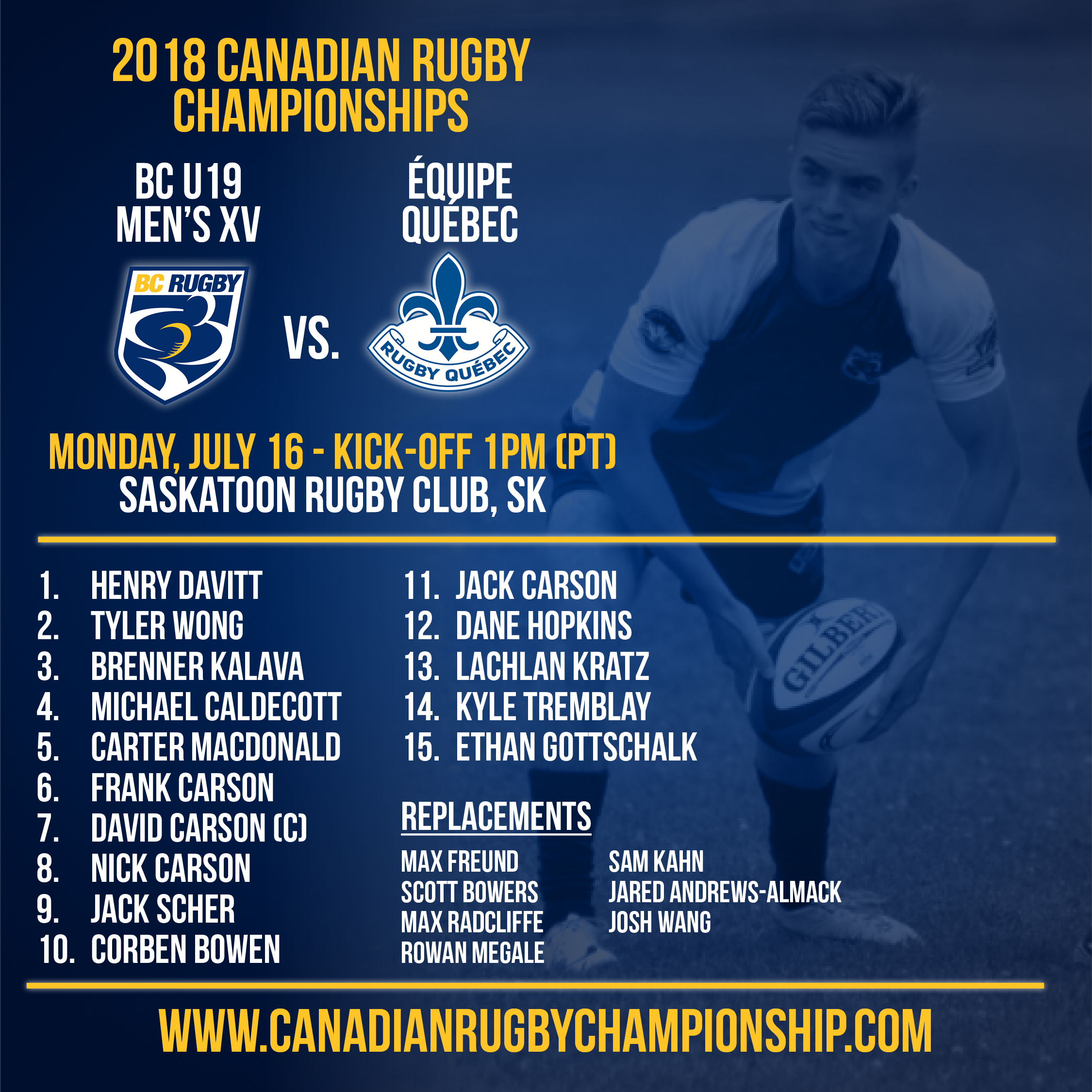 With a relatively young side, many of the team only recently stepped up from the U18 teams, this tournament was always likely to be a learning curve for the BC U20 Women’s Team.  They came out of the gates quite well, applying pressure on the Ontario side and scored first through Viviana Johnson. BC’s outside-centre applied a nice step to leave the Ontario defender hopeless. Unfortunately, after that Ontario didn’t just respond, they opened the floodgates.  Indeed it was as if the Ontario side were just operating in another gear for the remainder of the match, despite valiant efforts from BC to mount a defence. Part of Ontario’s game plan seemed to be to hit the middle of the field with tons of pace and work offloads incessantly, which they did. Every time an Ontarian player made space, they were supported by a teammate and aptly offloaded the ball for scoring opportunities. The score at half was BC 5 – Ontario 26.

BC saw some encouraging play by their backs and kept their discipline, but they weren’t able to hang in with this Ontario team whose smash and grab tactics were working with devastating effect. When BC did secure possession, they battled hard but came up against a well-drilled Ontario side that, metaphorically at least, had the wind at their backs. If this BC squad looks to change their fate at this tournament, then they will have to take a cue from Ontario who showed how to keep the ball alive and moving with pace.  They will have time to reflect, assess and prepare before their next match on Wednesday when they take on Alberta Wolfpack at 4:00pm MDT/3:00pm PT.

Head Coach Walt Brandl reflected after the match "We started strong in all phases of the game and scored well, but a couple of small mistakes, blocked kicks etc, snowballed into bigger things. At some point, the players lost confidence and the wheels fell off. Part of that is adjusting to this level of play.”  Brandl clearly has faith in his team though, understandable given the talent within it and is positive in his outlook for the rest of the tournament.  “The coaches have every reason to believe that we will come out strong and more effective next game." 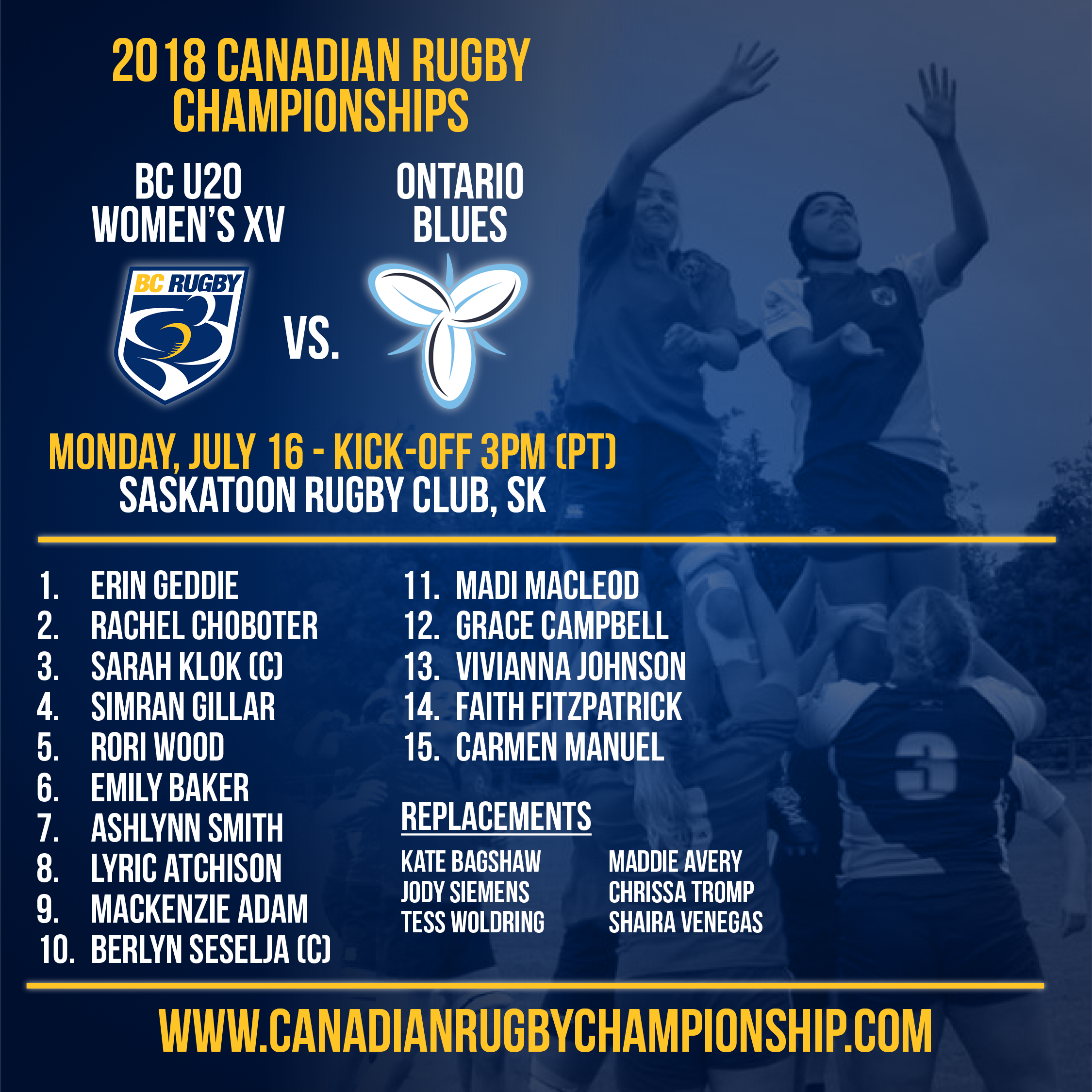 The last match of the day at Saskatoon Rugby Club was a real nail-biter between two well-matched sides, incidentally the bronze and silver medalists from the 2017 CRCs in Truro, NS.  Both started the match well, confidently taking the ball in to contact.  Wolfpack were first to show their hand, shipping the ball wide to their fullback who hit the boosters and accelerated down the touchline to open the scoring.  BC did well to chase all the way and keep her in the corner, with the resulting long-range conversion falling short of the target.

First blood to the Wolfpack and they clearly liked the taste as they were immediately on the offensive again, pinning BC down on their 5m line.  After sucking in more defenders the ball was worked to the centres and a grubber kick got in behind the BC defence, only for the Wolfpack to score again through their fullback.  Again, the conversion was missed, this time the ball ricocheting off the crossbar.  These two errant kicks would later come back to haunt the Albertans, but with a 10-0 early lead, they weren’t worried.

Keen to prove that the Wolfpack weren’t the only side with a talented fullback, BC’s Macy Munson went on a storming run down the nearside touchline that caught the opposition of guard.  BC continued to gain territory, Sophie de Goede blazing a path off the back of an attacking lineout, only to be stopped short of the line.  Quick thinking saw the offload move efficiently through players’ hands and it was Munson who eventually carried the ball the final few meters and crossed the line for BC.  Jess Neilson was on target with the conversion and with that BC indicated that they were going to have plenty to say in this fixture.

The ensuing to and fro demonstrated just how dangerous each side was, Wolfpack dominating any contest that involved their forwards, particularly the scrum and breakdown.  Meanwhile, BC were able to absorb the pressure and repel some serious attacks, before showing that when they secured possession they had some real skill at their disposal.  Building off great work from the BC pack, Brooke Bazian had no problem rounding her defender to help her team take the lead.  This incensed the Wolfpack and they stepped up their onslaught, waging war on the BC 5m line via their scrum, before a textbook pick and go from their Number 8 brought them their third try, a conversion rubbing salt in the wound.

In the second half, BC had to absorb a lot of early pressure.  While they were still no match for the might of the Albertan scrum, they managed to neutralise the threats out wide with a much quicker defensive line.  Finally securing some possession, Sophie de Goede and Gillian Boag combined well on the far touchline to break through the Wolfpack defence.  Their teammates surged up the field behind them and Brooke Bazian rounded off the move to secure BC’s third try.  Neilson again added an excellent conversion kick and BC were back in front, 19-17.  The celebration was short lived though, a fumbled restart handing possession and territory to the Wolfpack, the scrum doing the initial damage and the move finished off with some deft footwork from their no.11.  Conversion added, the Wolfpack once again took a five-point lead.

With the two teams so well matched and the game finely balanced, it’s only fair that fortune swung both ways.  This time Wolfpack fumbled the restart to hand a quick advantage to BC.  They took the chance with relish and stormed towards the posts, initially denied on the line but with advantage in hand. At the second time of asking, they were not to be denied, Tyson Beukeboom securing the points and the ever-accurate boot of Neilson making it a full seven points.  BC once again edged ahead.

It was a nervous end to the game from both sides, the Wolfpack well aware that they had the skills to secure more points but BC’s belief building and sensing that victory was near.  When a penalty came BCs way in the closing minutes, Jess Neilson stepped up to the mark full of confidence.  Having slotted home all but one attempt already and with a more generous angle than many of her conversions, this kick was a prime opportunity to add a little extra breathing room.  Confidently taken, the extra points may just have tipped the balance in the minds of the Albertans.  They continued to press but now it was against an increasingly certain wall of yellow and white, strong individual play combining to make a greater sum force in defence.  Moments later the final whistle blew and the match was over.

Head Coach Aaron Frisby was full of praise for the opposing side, saying “Their forward pack is going to do damage at this tournament. Isolating one on ones with their forwards is unstoppable.”  Acknowledging that this was a win they had wrestled back from the Wolfpack, Frisby commented, “We need to keep on our feet in contact and tighten up supporting play to eliminate the poach if we want to win our remaining matches”.  The BC Senior Women’s Xvs now had a day of rest before taking to the field on Wednesday against Nova Scotia Keltics at 4:00pm MDT/3:00pm PT. 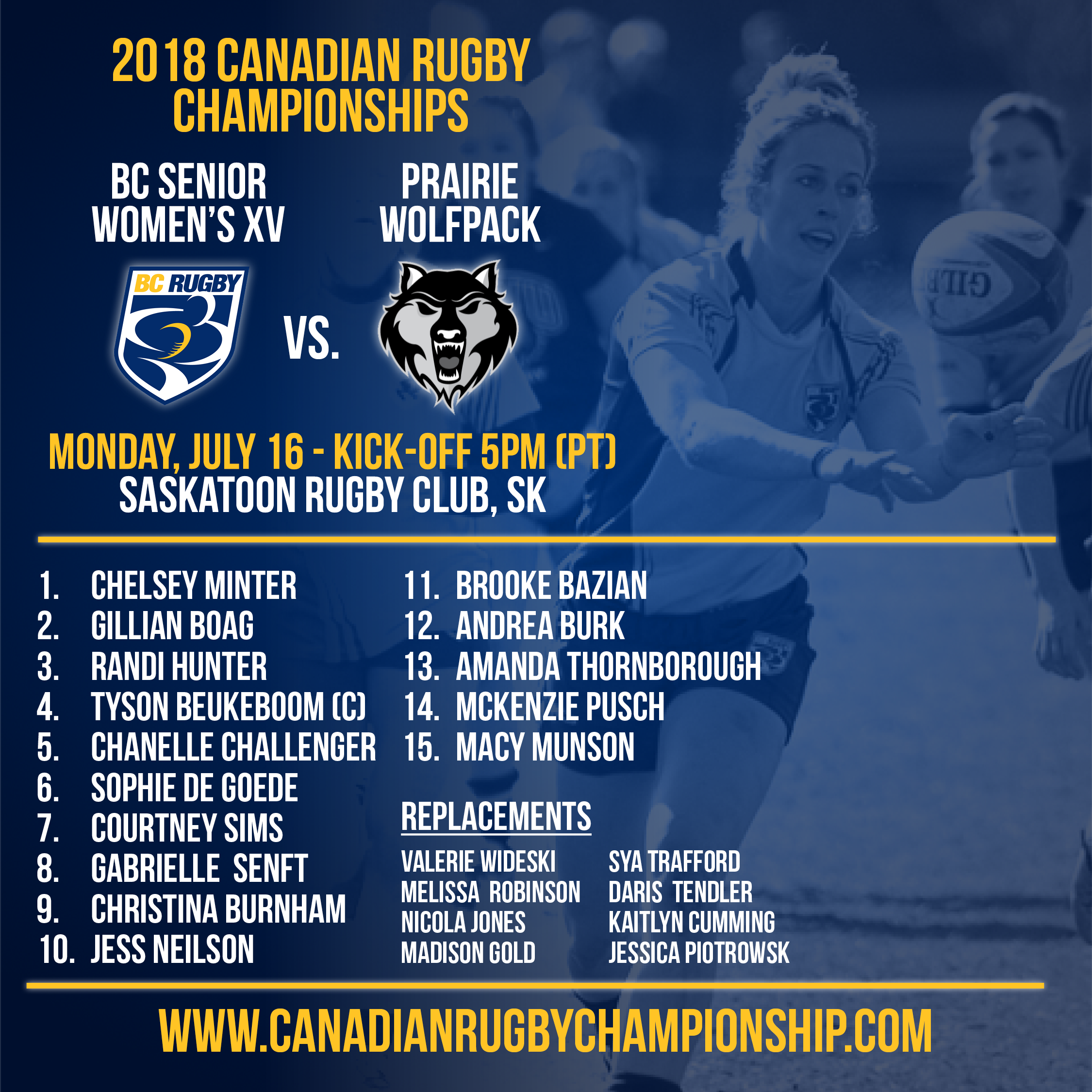